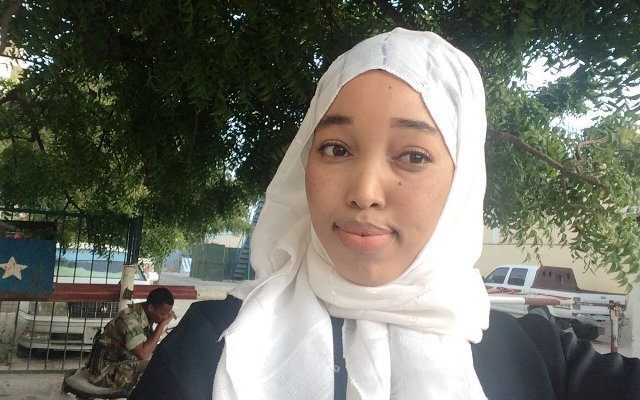 Somaliland president, Muse Bihi has ordered the release of Naima Ahmed, a young poet and activist who was sentenced to three years in prison.

According to local media, Naima Ahmed was granted presidential pardon after her family petitioned president Bihi for amnesty. She was released from Gabiley prison on May 7, 2018, where she served 23 days of her 3-year sentence.

Local human rights outfit, Human Rights Journalists (HRJ) in a statement issued on the same day welcomed the release of the young poet by the Somaliland authorities.

Last month, authorities in Somaliland sentenced Ahmed to three years in jail for publicly proclaiming that Somaliland was a part of the Republic of Somalia. The court found her statements “insulting and defamatory against the state.” Somaliland is a self-declared independent state in the Republic of Somalia. Naima was arrested at Hargeisa Airport on January 27, 2018 upon her return from Mogadishu. She was remanded into custody until April 15, 2018 when she was sentenced. She served 23 days of her 3-year sentence.

While the African Freedom of Expression Exchange (AFEX) joins HRJ to welcome the release of the young activist, we want to use this medium to reiterate that there is an urgent need for authorities in Somaliland to safeguard freedom of expression rights of citizens. It is unfortunate that citizens risk being sentenced to jail for exercising their fundamental rights to free express which is enshrined in the country’s constitution as well as regional and international frameworks.

Freedom of speech has been under attack in Somaliland recently. Authorities continue to use its penal code to repress free speech in the country. Within the last one month, authorities in Somaliland sentenced three persons on defamation/libel charges.

On April 16, 2018, Mohamed Kayse to 18 months in jail for a Facebook post in which he described the president Somaliland as “a local president.” Similarly, exactly 10 days later , on April 26, a court in Hargeisa  sentenced a clan chief, Boqor Osman Buur Madow to five years in prison for utterances authorities claimed defied the independence of Somaliland. Both Mohamed and Boqor Osman remain in custody.

Clearly all these cases involve citizens legitimately expressing harmless opinions about public matters. Their incarceration for exercising this democratic right therefore amounts to a crackdown on press freedom rights.

AFEX reitirates its appeal to Somaliland’s authorities to protect and respect the freedom of expression rights of its citizenry by releasing Mohamed and Boqor as a sign of their commitments to upholding the democratic principles of the country.

We also call on authorities to repeal the outdated penal code which is increasingly used to harass and intimidate journalists, activists and individuals in the country.