45 Days in Cyber Darkness: Cameroon Switches off Internet for Second Time in the Year 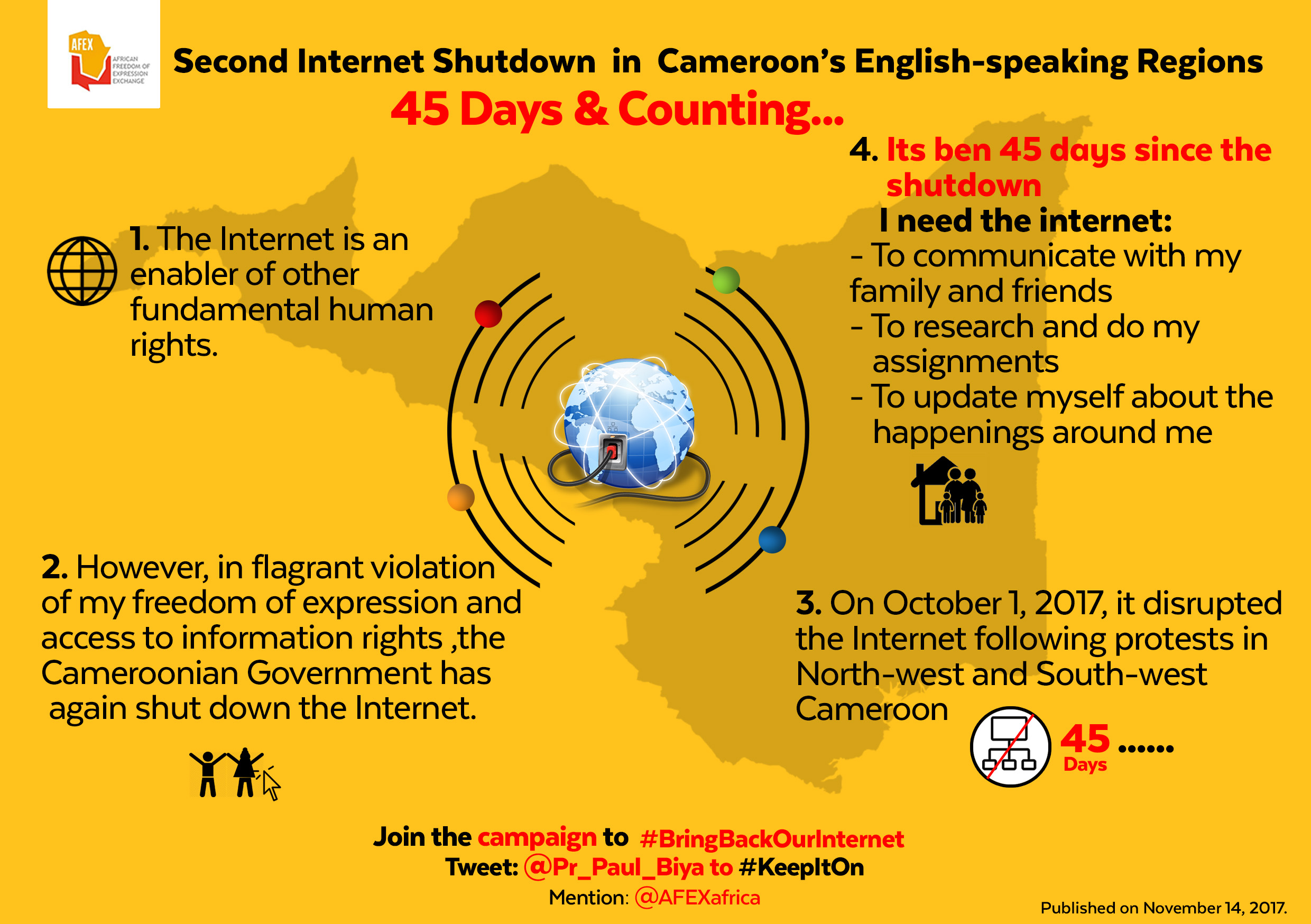 The government of Cameroon has within the last one year shut down the Internet in its attempt to clampdown on demonstrations by aggrieved citizens of the two English-speaking regions of the country.

Leaders of the North-west and South-west regions of Cameroon have accused the central government of discrimination against their people from the only two Anglophone regions out of the Central African country’s ten administrative regions. Protests against the reported acts of marginalisation, which the government continues to deny, intensified in November 2016, when the Paul Biya government made an attempt to impose the use of French language in schools and courts in the two English speaking regions.

In its bid to restore calm to the restive Anglophone regions, the government ended up violating the fundamental human rights of its citizenry including their rights to freedom of expression and freedom of assembly.

The national telecommunications and internet service provider, Cameroon Telecommunications (CAMTEL), on January 17, 2017 ordered Internet Service Providers in North-west and South-west regions to completely shut down the Internet in the two regions. What started as government’s expression of dissatisfaction about the ongoing protests turned out to be Africa’s longest Internet shutdown having lasted 94 days.  The three-month Internet shutdown had serious ramifications for political, economic and human development in the country.

The government again shut down the Internet on October 1, 2017 barely six months later, while the country is still struggling to recover from the economic loss from the previous shutdown estimated at U.S. $4.5 million.

Today, November 14, 2017 marks 45 days since the Cameroonian government deprived citizens of the restive English-speaking regions of Internet access – a blatant violation of their right to freedom of expression and access to information.

The African Freedom of Expression Exchange (AFEX) once again joins the international community to denounce the use of internet shutdowns as a mechanism to stifle free speech on the continent. Network shutdowns have proven futile during protests; in many instances, the cyber repression has rather helped fuel further anger and agitation among aggrieved citizens.

We call on President Paul Biya’s government to demonstrate its commitment to safeguard freedom of expression and access to information rights as enshrined in regional and international frameworks to which Cameroon is signatory.

AFEX urges President Biya to restore internet connection in the North-west and South-west Regions of Cameroon and ensure the protection of the lives of citizens in the dissenting regions.

We further call on the African Union (AU) and the United Nations Organisation (UNO) to intervene to ensure that the government of Cameroon and governments across the region put an end to the use of partial or complete network shutdowns to repress free speech during important national events under the guise of ‘protecting national security’.

In November 2016, the Cameroonian government decided to impose the use of French language in public institutions in the two Anglophone regions sparking a wave of protests. Several citizens have been arrested, detained, disappeared or even killed while the Internet has been shut down on two occasions. Calls from local, regional and international human rights organisations urging the Cameroonian government and the leadership of the two English-speaking regions to resort to resolving their differences have gone unheeded.

PS: Kindly use the Infograph above or click here to download for advocacy to pressurise the Paul Biya Government to restore the Internet in the two English-speaking regions.