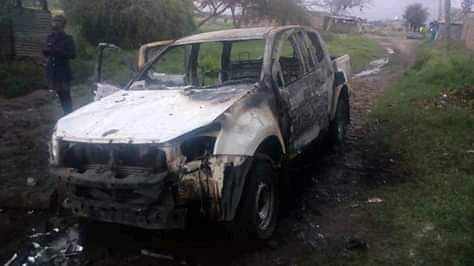 The African Freedom of Expression Exchange (AFEX) calls on the police to expeditiously investigate and punish unruly students who physically assaulted a crew working with the Kenya Television Network (KTN).

In a statement issued by Kenya Editors’ Guild, some students of the St Stephen’s Girls Secondary School in Machakos county on June 3, 2019, hurled stones at Caroline Bii, a reporter who had gone to the school to follow up on a story about a missing student. Bii was in the company of Boni Kirera, cameraman, and Immaculate Joseph a driver, all working with KTN, when the students attacked them. The irate students went ahead to set ablaze the crew’s vehicle containing their equipment.

According to local media reports, the Headmaster of the school, John Kyalo, who was present at the scene looked on and even incited the students to attack the reporter and her team. Kyalo had earlier declined an interview with the KTN crew accusing them of projecting a bad image about his school.

The TV crew had visited the school together with Mary Mukami, the missing girl’s mum. The management had explained that her daughter was in a South B Estate, a suburb in Nairobi. However, the explanation given by the school irritated Mukami who vehemently demanded her daughter from the teachers. This was when the Headmaster incited the students of the school to lash out on the TV crew and assaulted them.

On the same day (June 3, 2019), Kyalo was arrested by police for instigating the attack against the journalists.

AFEX welcomes the swift intervention by local police in the matter. We join Kenya Editors’ Guild and other media rights groups to denounce these acts of vandalism which are a threat to the safety of journalists and press freedom in the country.

This blatant act of lawlessness, allegedly, instigated by those in authority cannot be left unattended. It is absolutely wrong and unacceptable for students to be used as puppets to perpetrate such violent acts against the media in a country like Kenya, where the right to freedom of expression and press freedom is enshrined in the national Constitution.

We also call on the management of the school to work closely with the police in order to identify the students involved in this barbaric act and punish them to serve as a deterrent to others.

AFEX also urges the Ministry of Education and the Teacher’s Service Commission to launch an urgent inquiry into the Headmaster’s conduct and sanction him.

The authorities must also ensure that all destroyed equipment are replaced immediately.