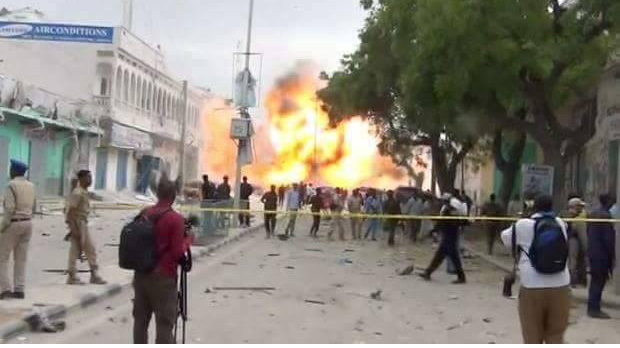 The African Freedom of Expression Exchange (AFEX) joins its member, the National Union of Somali Journalists (NUSOJ) in expressing deep concern over the continuing harassment of journalists in Somalia by security agents, unidentified non-State actors and government officials.

A total of eleven journalists and one media orgnanisation have been attacked in Somalia in six incidents of violations recorded from January 25 to April 1, 2017, according to the National Union of Somali Journalists (NUSOJ). The attacks included five incidents of physical assault, some of them fatal, and one incident of censorship.

In the second incident, Abdihamid Mohamed Osman, a Somali cameraman and video editor with London-based private station, Universal TV, was seriously wounded on March 12, 2017 when a bomb attached to his car exploded in Mogadishu’s Hamar-weyne district. Osman was on his way to work when the incident occurred. Both incidents were perpetrated by unidentified persons.

Other violations included two incidents of physical assault, one incident of censorship and kidnap each;

February 5, 2017, about 30 armed police officers in Puntland, a region in northeastern Somalia raided the premises of Radio Voice of Peace. The police forcefully pulled the director of the station, Ahmed Mohamed Ali, popularly known as Aano Geel, out of his office, and started beating him up with guns and batons. Ali sustained injuries in the neck, shoulders, lower back and chest and was admitted to the hospital. Another journalist working with the station, Rabile Abdikarim Mohamud, was threatened when he tried to intervene. No reason was given for the attack.

Exactly a month after, 0n March 5, 2017, authorities at the Ministry of Information in Puntland Regional State of Somalia, barred Universal TV, a private TV station from covering events in regions controlled by Puntland authorities. The Ministry accused the TV station of “creating conflict between people and the government (Puntland), destabilising regional security, spreading of false news and broadcasting news in contradiction of journalism ethics”. Puntland did not specify the period for which the private television network is barred to operate in its regions.

On March 19, 2017, Mahad Mohamed Abdurahman, a journalist working with Radio Shabelle, was wounded during clashes between two government forces in Tarbunka neighbourhood of Hodan district. Abdurahman, nicknamed Mutawakil, sustained injuries on the left hand and at the back. While wounded, Mahad Mohamed Abdurahman was assigned to conduct an interview with Hodan district commissioner Mr. Ahmed Salad Ibrahim and internally displaced people (IDP) living in Tarbunka over disputed opening of roads.

Again on April 1, 2017, unidentified gunmen kidnaped journalist, Hanad Ali Guled, working with privately owned Goobjoog Television of Goobjoog Media Group. Guled was driven to an unknown location where he was reportedly detained in a small room. Guled was found the following day, in the outskirts of Mogadishu, handcuffed and reportedly beating. The purpose for which Guled was kidnapped is unclear, but colleagues working with him stated that he has been receiving threats via telephone over his involvement in a drought relief programme, Media for Aid.

The above violations are part of a pattern of attacks that journalists in Somalia have had to endure over the years as Somalia has been described as one of the most dangerous places to practice journalism in Africa. Journalists who forge on despite these challenges also risk being harassed by security forces in the country.

AFEX urges the new Somali Government to intervene in order to end forthwith the egregious practices and decisions of security forces and government officials that are designed to curtail the freedom of journalists and the wider freedom of expression community, and allow them to enjoy their fundamental rights.