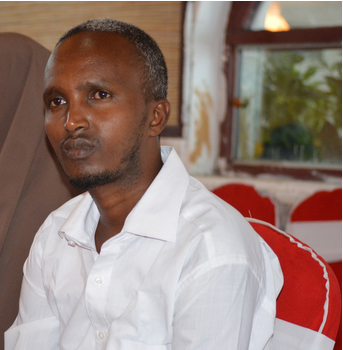 The African Freedom of Expression Exchange (AFEX) and its member in Somalia, National Union Somali Journalists (NUSOJ) urges authorities in Somalia to investigate the murder of journalist working with Radio Shabelle.

According to NUSOJ, two men armed with pistols on September 27, 2016, shot and killed a Radio Shabelle reporter in Yaqhshid district in the Somali capital, Mogadishu. He was on his way to visit his uncle when the incident happened. The murdered journalist has been identified as Abdiasis Mohamed Ali popularly known as Haji in Mogadishu.

In a statement issued by NUSOJ on September 27, NUSOJ Secretary General, Omar Faruk Osman said that the murder highlights once more the dreadful conditions under which journalists work in Somalia.  “This cold-blooded murder again shows the precarious security conditions that Somali journalists continue to face. This is another of a colleague, a friend and a union member. The journalist community in Mogadishu is shocked by this latest attack and there is a widespread concern that many more journalists are at risk due to upcoming indirect national elections for politically motivated assassins to eliminate defenseless journalists to send a political message”.

NUSOJ added that the deceased journalist had worked with Radio Shabelle for more than seven years and was arrested on several occasions by the police and the National Intelligence and Security Agency (NISA) in connection with his work as a journalist. The reason behind the murder of Abdiasis Mohammed is not clear.

Journalists in Somalia continue to work under dangerous conditions. This is the second journalist to be gunned down in Somalia this year.

In June 2016, a female journalist working with Somali National Television station (SNTV), Sagal Salad Osman was shot and killed in Hodan district of Somalia. No one has been held responsible four months after the barbaric killing of the journalist.

AFEX is deeply concerned about the prevalence of impunity for crimes against journalists, media professionals and activists in Somalia and on the continent.

We join NUSOJ to condemn the callous murder of journalist, Abdiasis Mohamed Ali and the murder of all other journalists in Somalia. We urge the Somali government to investigate into this unfortunate incident and ensure that the culprits are brought to justice.

AFEX also calls on the UN to put pressure on the Somali government to adopt measures to ensure that journalists in Somalia work under safe environment in line with the UN Plan of Action on the Safety of Journalists and the Issue of Impunity.