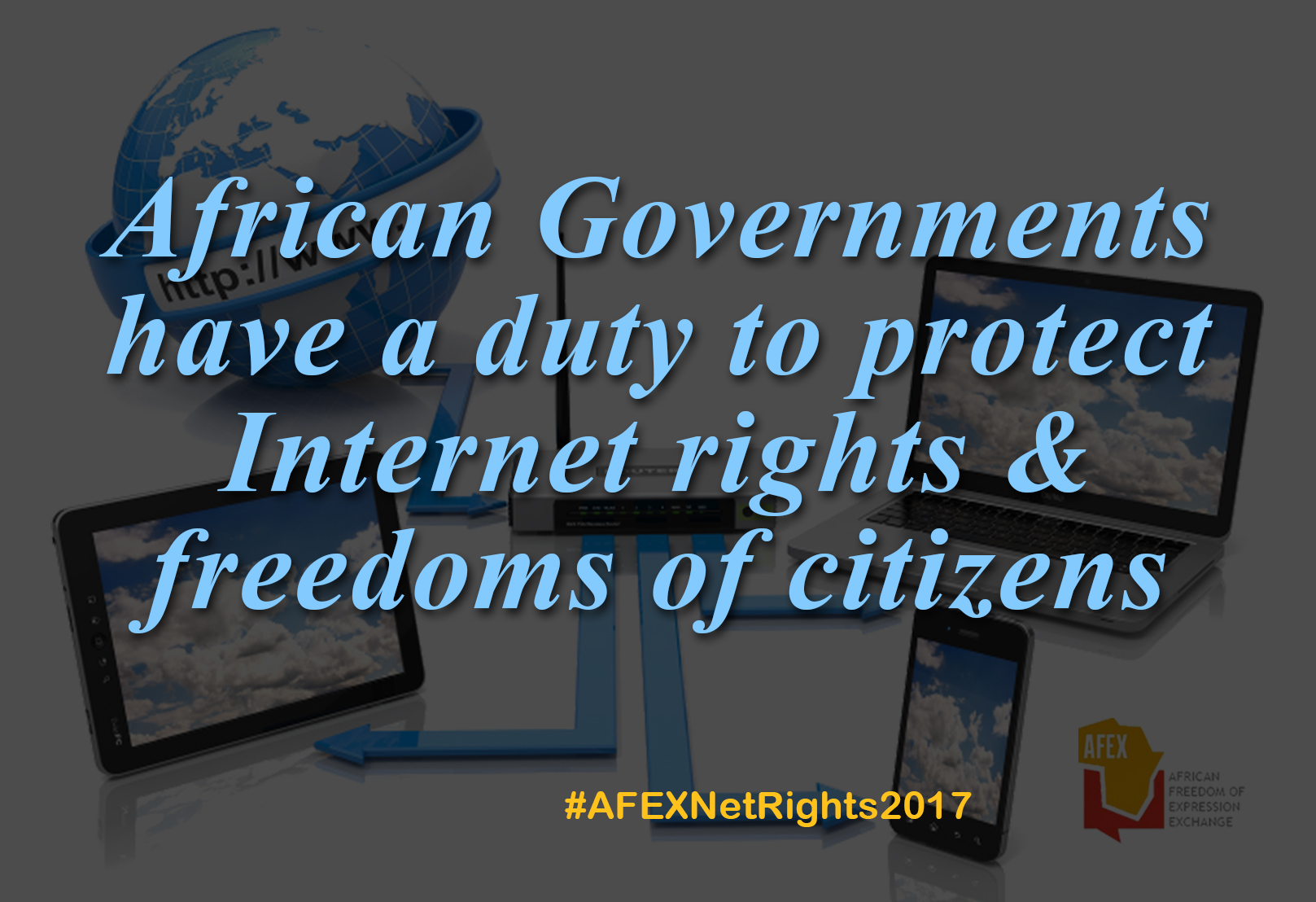 The African Freedom of Expression Exchange (AFEX) welcomes the African Commission on Human and People’s Rights (ACHPR)’s condemnation of increased adoption of stringent laws to regulate the online space in Africa.

In a statement signed by the Commission’s Special Rapporteur on Freedom of Expression and Access to Information in Africa (the Special Rapporteur) Commissioner Lawrence Mute, and the Country Rapporteur responsible for monitoring the human rights situation in Kenya and Tanzania Commissioner Solomon Dersso, expressed “concern on the growing trend of States in East Africa adopting stringent regulation measures on the Internet and Internet platforms.”

Considering the increasing threats and attacks on Internet rights and freedoms of citizens that have been recorded in Africa within the past years, AFEX shares the ACHPR’s concerns over the sad phenomenon. For instance, over the past, Tanzania, Uganda, and Kenya have introduced regulation that will further constrict the cyberspace in the various countries.

In March 2018, President Magufuli assented the Electronic and Postal Communications (Online Content) Regulations 2018, which among other things, requires bloggers and users of online platforms such as radio and television stations in Tanzania to pay up to 2,100,000 Tanzanian Shillings (about USD 930) in order to acquire operation licences. This regulation has been widely criticised as an affront to online speech. Several online platforms including the country’s leading platform, Jamii Forums were forced to shut down following government’s enforcement of the new online content regulation.

Similarly, President Uhuru Kenyatta of Kenya on May 16, 2018 passed into law the Computer Misuse and Cybercrimes Bill. Under the guise of tackling cybercrime in the country, the law contains repressive provisions that has the potential of muzzling freedom of speech in Kenya.a Prior to the adoption of the Computer Misuse and Cybercrimes law, the Kenya Film and Classification Board (KFCB) on May 14, 2018, imposed licences and exorbitant fees for anyone posting videos filmed with phones and/or posted to social media and punishment for violations include fines up to Kenyan Shillings (KES) 100,000 (GBP 752) or imprisonment of up to five years. The KFCB also has to approve such videos before they are uploaded.

As if the introduction of these laws were not unfortunate enough, the government of Uganda on July 1, 2018 began the implementation of the Excise Duty (Amendment) Bill 2018, popularly known as social media tax law. The controversial law requires users of ‘over the top’ services such as social media platforms to pay a daily levy of Ugandan Shillings (UGX) 200 (USD 0.05), to access these platforms.

It will be recalled that President Yoweri Museveni warned in April 2018 that he was going to tax social media usage as such platforms are used to promote “gossip” in the country.

As rightly noted by the ACHPR, these regulations “may negatively impact the ability of users to gain affordable access to the Internet”. The vaguely worded laws such as the case of Tanzania also give sweeping powers to the government to censor content deemed unfavourable. It also contains onerous penalties of up to at least 12 months’ imprisonment or a minimum fine of 5,000,000Tanzanian Shillings (USD 2,190.30), or both. These strict provisions will serve as an avenue/opportunity for authorities to witch hunt journalists, bloggers, activists and individuals who are critical of their governments.

AFEX joins The AU Special Rapporteur on Freedom of Expression and Access to Information to denounce these regulations, and urge authorities in the various countries to review the laws.  We also join The ACHPR to remind these States of their obligations to recognise the important role of the Internet in advancing human and peoples’ rights in their respective countries and in Africa as noted in the Resolution on the Right to Freedom of Information and Expression on the Internet in Africa

Again, AFEX urges African governments to recognise their obligations and commitment to protect the online freedom of expression and access to information rights.

Read the full statement by the Commission published on July 12, 2018 here.