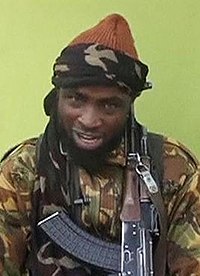 The Boko Haram Islamist sect leader,Abubakar Shekau, has warned journalists to be careful about their reporting of the sect’s activities and threatened to “deal” with Dr. Isa Ali Pantami, the Minister of Communications, for allegedly threatening to disrupt the activities of the sect by blocking their communication lines.

In a nine-minute video which AbubakarShekau said was made on, February 13, 2020 he warned: “The journalists on BBC, Radio Germany, Radio France International, Dandal Kura, national dailies, be very careful in all that you say about us. We are not dealing with you people; we are doing the work of Allah. Our trust is in Allah and not in human beings.”

Addressing Dr. Pantami in the video, the sect leader said:“You said you are going to block phone lines and other means of communication, to frustrate the activities of Boko Haram. But you must understand that we don’t depend on such to send out our messages,” adding “from today on, you would not have peace of mind because you have dared Allah, his prophet and the religion of Islam.’

Shekau called on Muslims not to spare the Minister.