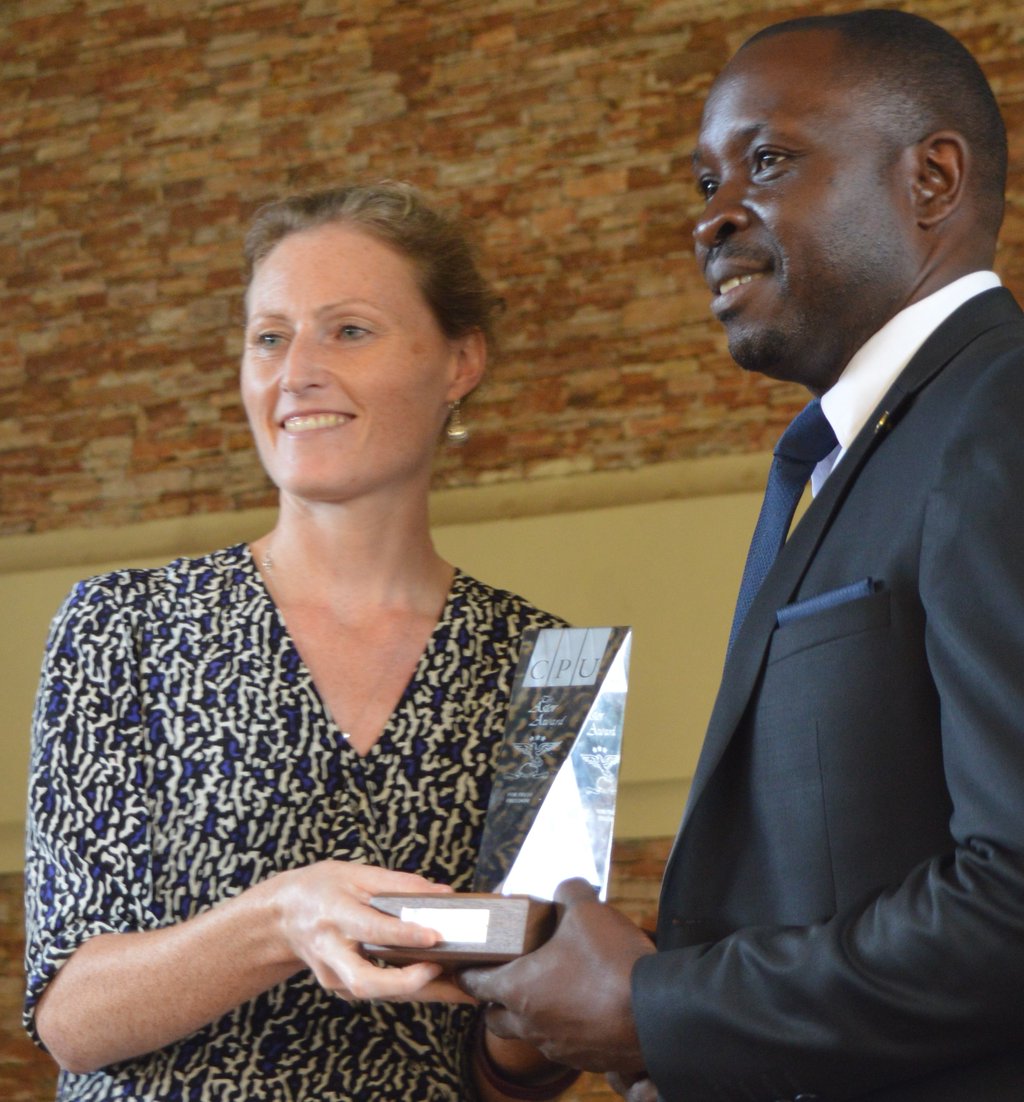 The National Coordinator of Human Rights Network for Journalists-Uganda (HRNJ-Uganda), Robert Ssempala has won the European Union Human Rights Defenders Award for the year 2016 for his outstanding resilience and determination to promote and protect the universally recognized rights and fundamental freedoms in Uganda during the year 2015. The prestigious award was handed over to him by the Danish Ambassador H.E Mogens Perderson.

“Under his leadership, Human Rights Network for Journalists has supported a number of journalists who have been assaulted, imprisoned and targeted in the course of their work and in the fight for freedom of expression,” The Ambassador said during the EU Annual Human Rights Defenders Award ceremony, held at his residence at Kololo, in Kampala, attended by a number of Ambassadors.

Ambassador Morgen noted that HRNJ-Uganda has ensured that the many violations against media freedom remain in the limelight, adding that recently it was “closely involved in documenting cases of media practitioners being assaulted by both politicians and security forces during the election campaigns.”

He said the award signifies the EU’s recognition of the efforts by Human Rights Defenders who work tirelessly to fight human rights violations. “Congratulations Robert for emerging as the winner for this year! We hope that this recognition will propel you as well as other human rights defenders to greater performance.” Ambassador Morgen said on behalf of the EU Mission and Ambassadors in Uganda.

Accepting the award, the HRNJ-Uganda National Coordinator, Robert Ssempala thanked the EU delegation for recognizing him and his team for the work they have done. “This a great feat in the ceaseless fight for freedom of expression and the press in the country amidst tough challenges, and this award justifies the increasing need for an environment free from pre-meditated violations of media freedoms and journalists’ rights in Uganda and beyond.”

Ssempala noted that the Award would help him and other defenders, “to remind the government; especially the security agencies, of their duty and obligation to protect and defend people’s rights while ensuring law and order. It is therefore unacceptable that today police officers in Uganda have rather become the key violators of fundamental freedoms especially freedom of speech, expression, assembly, association and of late freedom of worship, among others.”

Ambassador Pederson pointed that much as Freedom of Expression is an important tenant of democracy, it is faced with several impediments in Uganda. “Freedom of Expression is an important principle in any democracy. In Uganda, we have recently witnessed restrictions on the media-including shutting down the social media which has continued even after the elections. Some media houses have been intimidated and several journalists were assaulted, or injured during the course of their work. We call for tolerance of divergent political views and a constructive national dialogue.”

The European Union (EU) missions and delegation in Uganda established the Annual HRDs Award in 2012 to raise awareness on the work of human rights defenders (HRDs). The award recognizes and honors the achievements of an individual human rights defender in Uganda, who has made an outstanding contribution to the promotion and protection of human rights during the year. Nominations are received from Human Rights organizations and individuals active in Uganda, and the winner is selected by the EU heads of mission. Ssempala’ predecessor, Geoffrey Wokulira Ssebaggala, won the award in 2013 when he was National Coordinator of HRNJ-Uganda.

On a similar excellence front, HRNJ-Uganda was on the 11th April, 2016 recognized by the Common Wealth Press Union (CPU) Media Trust when the CPU Chairman, Lord Black awarded the Organisation with the ‘Commonwealth Press Union Astor Award’ that was handed over to National Coordinator by the Deputy British High Commissioner H.E Susan Schockledge on the World Press Freedom Day 3rd May in Kampala.