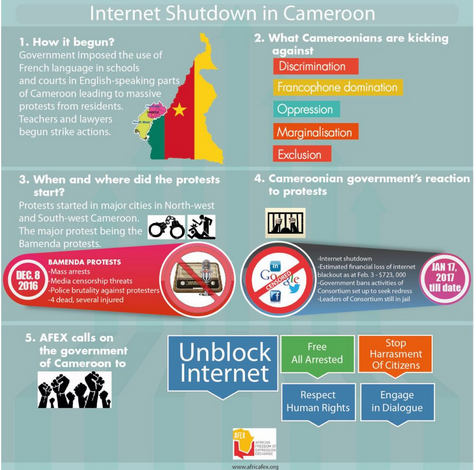 The President of the Republic of Cameroon, Paul Biya, has ordered the Military Court in Yaoundé to drop charges against four journalists and two leaders of the Cameroon Anglophone Civil Society Consortium (CACSC).

Dr. Nkongho Felix Agbor-Balla, President of CACSC and Dr. Fontem A. Neba, Secretary General of CACSC were arrested on January 17, 2017 after government banned activities of the CACSC which was set up by some eminent persons in North-west and South-west Cameroon to dialogue with the government about the Anglophone crises.

Four journalists who were also among those arrested for reporting on the crises were also released. They are Hans Achumba a journalist working with Jakiri Community Radio and Mofor Ndong, publisher of the Bamenda-based newspaper Voice of the Voiceless. The others are Tim Finnian publisher of Life Time newspaper and Atia Azohnwi, a journalist with The Sun newspaper.

Since November 2016, there have been ongoing protests and unrest in the two Anglophone regions of Cameroon following the decision of government to impose the use French language in schools and courts based in the regions.

The President’s decision according to a Press Release issued by the Presidency on August 30, 2017 instructed the Yaounde Military Tribunal to discontinue proceedings against over 50 persons that included the above mentioned journalists and leaders was in line with numerous measures undertaken by the Government to address concerns of the people of the two Anglophone regions.

“This decision, which is in line with numerous measures already taken by the Government to address the concerns voiced by the people of the two regions, stems from the Head of State’s firm resolve to continuously explore ways and means of seeking a peaceful solution to crises, through virtues of tolerance, dialogue and humanism”, the statement said.

The statement however, contained dire warning for activists and dissidents termed as “enemies of peace and progress of the country.”

“The Head of State, however, reaffirms his determination to relentlessly combat all enemies of peace and progress, champions of division and criminals of all kinds who, under the guise of political demands, attempt to jeopardise the future of our country and especially that of our youths. They will be brought before the courts.”

Inasmuch as the African Freedom of Expression Exchange (AFEX) acknowledges the efforts being made by the government to resolve the ongoing crises in South-west and North-west Cameroon, we appeal to the Paul Biya government to tone down the anti-freedom rhetoric and demonstrate commitments in upholding freedom of expression rights of citizens as guaranteed by Cameroon’s Constitution and other regional frameworks signed by the country. We call on the President to further release all who still remain incarcerated and resort to dialogue in resolving the crises.