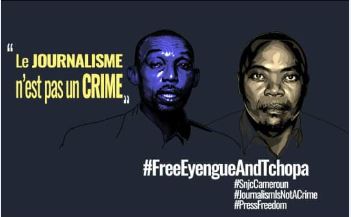 The African Freedom of Expression Exchange (AFEX) demands the release of journalists, Théodore Tchopa and David Nzima Enyegue both working with privately owned, Le Jour daily newspaper based in Douala.

The two journalists were arrested by the police on January 28, 2019 while covering the arrest of Professor Maurice Kamto, national president of the Cameroonian Renaissance Movement (CRM) political party and some of his close allies at the residence of one Albert Dzongang, Kamto’s strategy advisor.

According to AFEX sources in Cameroon, Tchopa and Enyegue are currently being held at the Groupement Special d ’Operation (Special Operations Unit) of the Cameroonian police service.

No charge has been brought against the two journalists. However, according to their lawyers, the two as well as those arrested are being treated inhumanely in violation of the rights of any suspect.

The police have also confiscated mobile phones and other gadgets belonging to the journalists.

The police operation to arrest Professor Maurice Kamto and his allies was a public event that the journalists had the right to cover and bring to the attention of all Cameroonians. These two journalists were identifiable by their professional badges and identity cards which showed them to be members of the National Union of Journalists of Cameroon (SNJC).

The arrest and incarceration of the reporters therefore contravenes Cameroon’s national constitution, the 1990 Law on Social Communication in Cameroon and regional and international conventions ratified by Cameroon.

AFEX condemns the arbitrary detention of the Enyegue and Tchopa and demands their immediate and unconditional release together with the other persons in custody. The police should also return all confiscated items belonging to the journalists. We also call on the management of the newspaper to pursue the matter and ensure the release of the journalists.