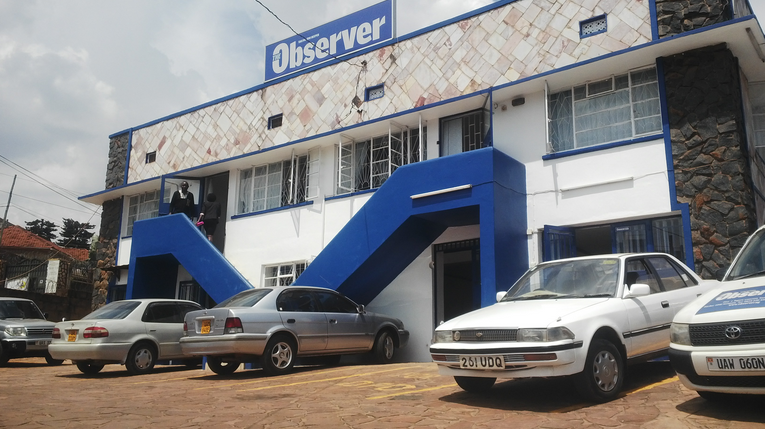 This statement was originally published by HRNJ-Uganda on October 17, 2016.

Unknown assailants broke into the premises of the Observer Newspaper at Plot 1Tagore Crescent, Kamwokya in Kampala and made away with vital equipment and information. The security guard on duty was missing, while his gun was recovered at the premises.

The Bi-weekly’ publication Managing Director, James Tumusiime told Human Rights Network for Journalists-Uganda (HRNJ-Uganda) that the intruders accessed the offices in the wee hours of Saturday 16th Oct, 2016 when they cut the padlock to the Newsroom, after going through the main gate which was found wide open.

“Eighteen computers –some belonging to the editors, marketing executives and reporters, flash discs, a camera lens, cell phone, internet modem, and some confidential information and materials were stolen by the attackers. They also took a couple of news stories which were being worked on at the time. All drawers in the newsroom and marketing room were broken.” Tumusiime told HRNJ-Uganda at the Observers headquarters at Kamwokya.

Tumusiime said that much as they could not implicate anyone, they couldn’t rule out malicious intentions and connivance with the security guard –provided by Delta Security Services Company who had been about a week old at the offices.

HRNJ-Uganda has also learnt that some padlocks at the Observer offices had been tampered with on Thursday night and could hardly open in the morning, but were later replaced with no suspicion.

The Observer, Red Pepper, Daily Monitor, Uganda Radio Network and the New Vision were a fortnight summoned to appear before the Parliamentary Committee on Rules, Privileges and Discipline over what was called negative publicity against Parliament. All but the New Vision declined to appear before the committee arguing that since Parliament was the complainant, it could not be the one to try the media houses, adding that the media was doing its work in watching over the actions of the MPs. Parliament has since issued fresh summons to the four media houses to appear this week.

This comes at the backdrop of rampant office break-ins, mainly for organisations defending on human rights, which promoted the leaders of the Civil Society Organisations to seek for a meeting with the Inspector General of Police, Gen. Kale Kayihura and the Minister of Internal Affairs, Gen. Aronda Nyakairima (RIP) to reign in on the situation. There however seems to be no solution as more organisations have continued to fall victim without any perpetrators being brought to book. HRNJ-Uganda offices have been broken into three times in a space of two (2) years, in 2013, 2015 and 2016.

Other victim organisations include; Human Rights Network-Uganda (HURINET-U), Uganda Land Alliance, Human Rights Promotion and Awareness Forum, NGO Forum, Foundation For Human Rights Initiative, Refugee Law Project, among others. Some time back, offices of the Red Pepper were set on fire at night by armed men. No suspects have been arrested or conclusive investigations conducted by the police.

“This blatant attack on the media is a direct interference with freedom of expression and the media which the police should investigate thoroughly. We urge the media houses to remain firm and do their work despite such acts that pose a direct danger to their lives,” said the HRNJ-Uganda National Coordinator, Robert Ssempala.