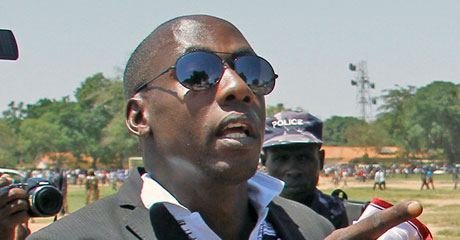 This Alert was originally published by HRNJ-Uganda on January 8, 2016

Ugandan police on January 7, 2016, detained  the Managing Editors of the Red Pepper and its sister paper, Kamunye, Ben Baryabaha and Mubiru Dickson respectively after a six  hour interrogation over publication of a dead body presumed to be of one Christopher Aine that appeared in both publications on  January 7, 2016.

By the time HRNJ-Uganda issued this alert on January 8, 2016, no one had been allowed to access the duo who was being detained at the police’s Special Investigations Unit headquarters in Kireka –a Kampala suburb.  The duo was interrogated by a group of six police personnel headed by the Acting Deputy Director Criminal Investigations Directorate (CIID), Odong Mark Paul.

The Red Pepper Publications legal officer, Sheba Amanya told HRNJ-Uganda that the police detectives denied them access to the duo, pending receiving directives from their superiors. “They were detained at 11:00pm on January 7 and were not charged. We have not been allowed to see them since we arrived here. The officers have told us they are waiting to hear from their bosses,” Sheba said.

The State accuses him for allegedly assaulting Presidential candidate (incumbent) Yoweri Kaguta Museveni’s supporters who stormed Mbabazi’s   rally in Ntungamo, Western Uganda about a month ago.

The Kampala Metropolitan Police (KMP) Spokesperson, Patrick Onyango declined to comment on the matter when contacted by HRNJ-Uganda, “You go to Kireka and talk to them. Have they spent more than 48 hours in custody? Why are you following it up?” he told HRNJ-Uganda.

The Police spokesperson Fred Enanga could not pick up calls on his known mobile contact.

Social media has been awash with the said body of Aine who was reportedly arrested from his home in Kisaasi about 3 weeks ago by armed security men. Both the police and Mbabazi supporters have offered a cash reward for his whereabouts.

In 2013, the State closed down four media houses for 10 days over publication of a letter authored by the then security coordinator, Gen. David Sejusa alleging assassination plot of those said to be opposed to the president’s son presidential ambitions to succeed his father, President Museveni.

“Denying the editors’ access to their lawyers is a gross violation of their basic rights while in custodial interrogation. This amounts to miscarriage of justice to the journalists. If the State has the right information, it should release it to the media other than incarcerating the journalists,” said the HRNJ-Uganda National Coordinator Robert Ssempala.