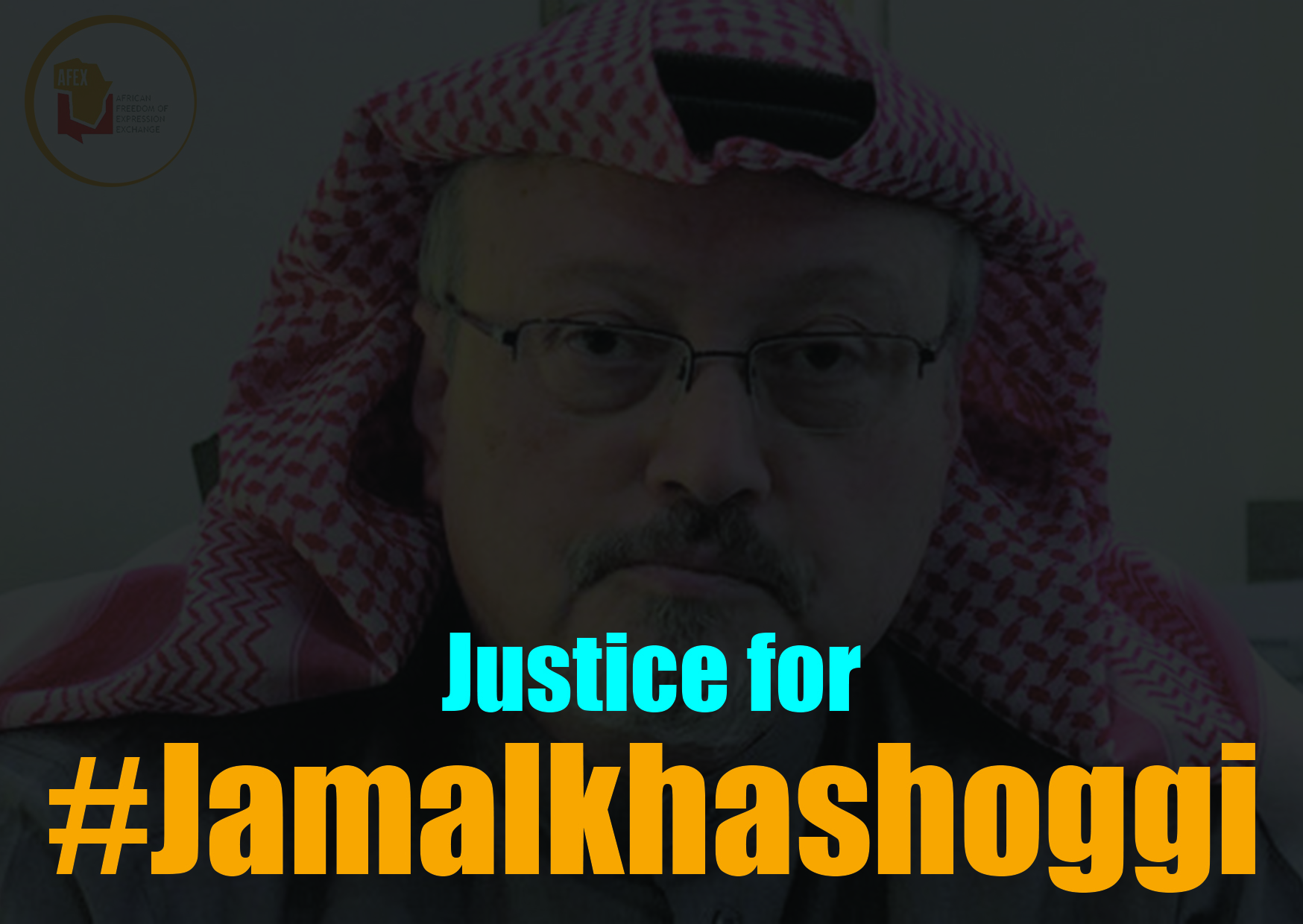 Accra, Ghana, Monday, October 29, 2018:  The African Freedom of Expression Exchange (AFEX), a network of prominent media and freedom of expression organisations across the continent, today condemned the October 2, 2018 gruesome murder of renowned Saudi journalist, Jamal Khashoggi, in the Saudi consulate in Istanbul, Turkey, saying a country that indulges in such barbaric behaviour ought to be ostracized by the civilized world.

In a statement issued from its Secretariat in Accra, AFEX called on the United Nations to demonstrate its commitment to the safety of journalists and ending impunity for crimes against journalists by taking decisive action against Saudi Arabia which, “despite the overwhelming evidence of official complicity in the murder of the journalist, has engaged in bare-faced denials, duplicity, peddling falsehoods and then grudging admission laced with half-truths.”

Chair of AFEX Steering Committee, Mr. Edetaen Ojo, said: “There can be no acceptable excuse or justification for the failure of the United Nations to take action against Saudi Arabia for this heinous state-sponsored crime against a journalist at a time when the international community, led by the UN, is trying to implement a series of measures to address the problem of crimes against journalists and end impunity for such crimes. A failure by the UN to sanction one of its members whose agents were responsible for this gruesome murder would rightly raise serious questions about its commitment to the safety of journalists and ending impunity for crimes against them.”

According to Mr. Ojo, “Given the evident use of Saudi Government resources to facilitate the brutal murder of Jamal Khashoggi and the involvement of multiple Saudi officials in the crime, including the initial efforts to cover it up, we have no faith any investigation conducted by Saudi Arabia or its ability to bring all those responsible to justice. Its continued refusal to disclose the whereabouts of the journalist’s remains is evidence that the country is still unwilling to come clean and make a full disclosure.”

He therefore called on the UN to launch an independent international investigation into the murder to establish the extent of involvement of various officials within the Saudi government, including who issued the order for the killing of the journalist and all those who played a role in the incident.

Mr. Ojo stressed that It is only by so doing that the UN can convince the world that it is truly serious in its efforts, as outlined in various resolutions and plans on the subject adopted since 2012 by its organs and agencies such as the General Assembly, the Human Rights Council and UNESCO, aimed at ensuring the safety of journalists and ending impunity for crimes against journalists. To do nothing would be to give a stamp of approval to impunity!

It noted that with the exception of South Africa, which has expressed “concern” over the “disappearance” of the Saudi journalist, no other African government has commented on or condemned the action, while the South Africa itself continues to conduct business with the Gulf state despite allegations that government officials were involved in Khashoggi’s murder.

AFEX observed that African cultures and traditions are founded on the values of truth, fairness and justice, as a result of which it is difficult to understand the basis of the silence of African leaders in this matter.

According to the AFEX network, besides the requirements of international norms and standards, even under African cultures and traditions, no society would condone the kind of behaviour that Saudi Arabia has exhibited.  All across the continent, the unlawful and unjustifiable killing of an individual such as in the case of Khashoggi would be considered a taboo or repugnant conduct and visited with drastic punishment.

The Network therefore called on African leaders to have the moral courage to stand for fairness and justice and, accordingly, join the rest of the international community in unequivocally condemning the abhorrent action of Saudi Arabia.

AFEX is currently made up of 12 media rights and freedom of expression organisations across West, East, Central and Southern regions of Africa, namely: