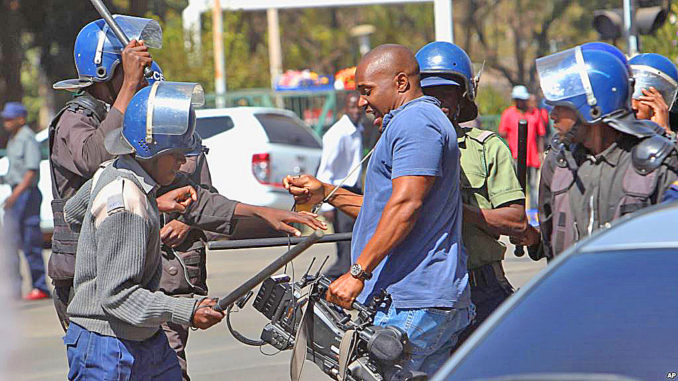 The African Freedom of Expression Exchange has welcomed a recent ruling by a High Court in Zimbabwe on April 20, 2020, ordered the police and other law enforcement agencies charged with enforcing the COVID-19 lockdown not to arrest, detain or interfere “in any unnecessary way” with the work of journalists.

The ruling by the Zimbabwe High Court judge, Justice Manzunzu follows an urgent chamber application that was filed by AFEX member in Zimbabwe, MISA-Zimbabwe (first applicant), and journalist Panashe Makufa (second applicant), against the arrests and harassment of journalists by police officers during the lockdown. The Commissioner-General of Police and the Zimbabwe Media Commission (ZMC) were cited, respectively, as the first and second respondents in the application filed by the applicants’ lawyer Chris Mhike.

During the ruling, the trail judge, Justice Manzunzu said, “police officers and all other law enforcement agencies charged with the duty to implement the Coronavirus related lockdown are interdicted from arresting, detaining or interfering in any unnecessary way with the work of the 2nd applicant (Makufa) and members of 1stapplicant (MISA Zimbabwe) purely on the basis that their press cards issued in 2019 have expired.”

The Commissioner-General of Police and the ZMC were also ordered to ensure that the statement by ZMC on the validity of the 2019 press cards is communicated to all police stations in Zimbabwe within 12 hours from their receipt of the court order, as well as to appropriate commanding offices of any agents who might be assisting the Zimbabwe Republic Police in enforcing the law.

MISA Zimbabwe hopes that the interim relief order granted by the High Court will bring to an end the unlawful harassment and arrests of journalists which was on the rise, particularly during this lockdown period.

It noted the ruling as a victory for media practitioners and the right to media freedom in Zimbabwe as the court order should go a long way in entrenching the enjoyment of media freedom during the lockdown extension period and beyond. Indeed journalists are an essential service as they are critical in promoting access to information by citizens.

According to MISA Zimbabwe, the ruling also comes at a time when the government has since gazetted Statutory Instrument (SI) 93 of 2020 following the extension of the lockdown, which among other measures, also specifically highlights that communication and telecommunication services include the internet, journalists and newspaper vendors.

This, the organisation hopes, will go a long way in ensuring that citizens access accurate, credible, verifiable and useful information about the pandemic and how they can prevent contamination and its spread in their various communities.