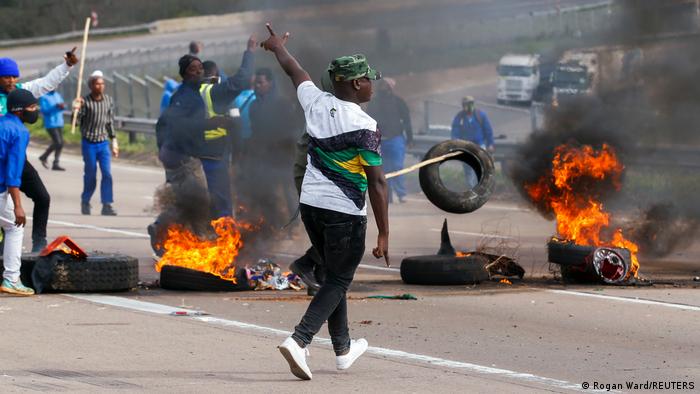 According to the Government Communication and Information System (GCIS) a number of community radio stations in the two affected provinces were negatively impacted, including Alex FM, Westside FM, Mamelodi FM as well as Intokozo FM.

It will be recalled that Jacob Zuma had appeared before the court several times since his reign ended in 2018, to account for public funds embezzlement and mismanagement while steering the affairs of the state at the helm of the South Africa nation.

In the line of the prosecution, the court found him guilty of defying a court order to appear at an inquiry into corruption allegations when he was in power.  Failure of compliance, the Constitutional Court slapped him with 15 months into jail for contempt of court.

According to media reportage, the condemnation of Zuma triggered riots from the former president’s home base of KwaZulu-Natal province and spread across the country.

As a result of the violent protests, business and transport networks have been disrupted by the protesters, including thugs, ill-intentioned people who took advantage of the situation to break commerce, shopping malls. Massive looting was reported by the media and by individuals on social media platforms.

The security forces have also responded to the protests, by arresting more than 200 people, dispersed hundred of several others, while more than 40 people were reported killed and scores others injured.

As looting and anarchy continue, people in some communities organized themselves in assuring security and defending commercial centers and shopping malls to prevent looting.

From the perspectives of some sociopolitical analysts, the spate of violent protest, including looting and anarchy is unprecedented since the end of the white minority reign in South Africa, under the apartheid segregationist regime.

It is also believed that the impact of COVID-19 pandemic and its associated restrictions, including the recent lockdowns measures decreed in the country compounded with losses as business activities have cut down due to the pandemic had frustrated many people.

The sentencing of Jacob Zuma, therefore, opened floodgates of frustrations that were incubating among several underprivileged communities. However, this must not serve as a pretext for violent protests, vandalism, and anarchy ever recorded in the country. Some people are of the view that the country was sitting on a socio-political time-bomb, due to economic hardship, widespread corruption, and criminalities.

”The rioting and looting are a prime way for many criminal elements to take advantage of the situation under the banner of Free Zuma whether they believe in it or not,” has told, Mervyn Abrahams, program coordinator for the Pietermaritzburg Economic Justice Dignity to Bloomberg.

Addresses to the nation of President Cyril Ramaphosa have not dissuaded rioting and looting, while security forces are struggling to contain the vandalism, chaos, with several people killed.

AFEX and FXI are appalled by the violent protest, looting, and vandalism. ”This undermines the rights of peaceful demonstration and sets a bad precedent that could serve as a basis for detractors of freedom of peaceful demonstration. Such a situation has the potential to downgrade the right of freedom to protests as part of fundamental civil and political rights, including the right to freedom of expression. We call on the authorities to play their roles in a responsible manner,” said Mr Samkelo Mokhine, Executive Director of Freedom of Expression Institute.

Therefore, AFEX and FXI condemn in the strongest terms any violent protests, including vandalism and looting of private and public property.

We demand political leaders, and the organisers of protests to educate their sympathizers on the exercise of the rights to freedom of peaceful demonstration, respect of other people’s rights, and protection of property, including the media.

The demand for accountability from public officer holders, including past presidents and high-profile public servants, forms part of the key requirements for the consolidation of any democratic regime, and rule of laws.

We also call on the authorities and security agents to exercise responsibly, their execution of public order and crowd control and bring before the rigor of the law those found perpetrators of looting, vandalism, and anarchy.