This statement was originally published on mfwa.org on May 19, 2017.

A Magistrates’ court in the Gambian capital, Banjul has issued an arrest warrant for the suspected killers of prominent Gambian Journalist and founder of independent Point Newspaper, Deyda Hydara.

The court issued the warrant for the arrest of a Former Army Commander, Kawsu Camara, and Major Sanna Manjang, an alleged assassin (popularly referred to as jungler) of former dictator Yahya Jammeh.

The Principal Magistrate of the Court, Isatou Janneh-Njie issued the arrest warrant after police accused the two for the murder of Hydara and filed an application for their arrest.

Deyda Hydara, then editor of The Point newspaper and a well-known critic of Yahya Jammeh was gunned down in a drive-by shooting by unknown assailants on his way from work on December 16, 2004. Prior to his death, Hydara was the president of the Gambia Press Union (GPU) and led advocacy efforts against legislative restrictions on press freedom in the country. 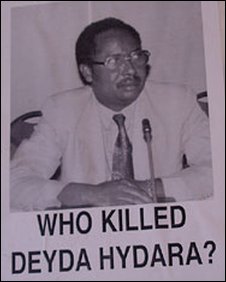 After Hydara’s murder, the state opened an investigation which was closed after 22 days. No arrests were made and no one was held responsible for the murder. The government silenced media who spoke about Hydara’s murder and also attempted to vilify him. In an interview on the state-owned Gambian Radio and Television Stations (GRTS) on June 9, 2009, ex-president Yahya Jammeh said Hydara’s gruesome murder was as a “result of personal revenge by a jealous husband, whose wife committed adultery with Hydara.”

On November 23, 2011 Hydara’s family together with the International Federation of Journalists-Africa filed a suit at the ECOWAS Court against The Gambia.

The MFWA welcomes this news of the issuance of the arrest warrant for the suspects and hopes that this will be a step towards ensuring justice for Hydara and his family.