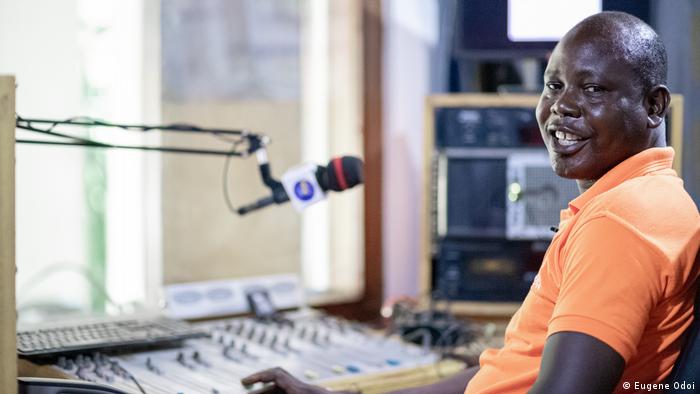 The police have arrested and are harassing Noah Dameh, the Deputy Station Co-ordinator of the Community Radio Station, Radio Ada located in the Greater Accra Region of Ghana, over false publication charges.

The charges relate to a Facebook post by the journalist on May 8, 2022, and a subsequent complaint by ElectroChem Ghana Limited, the company granted a controversial concession to mine salt in Ada.

Dameh was invited by the Tema Regional Police Command on May 24, 2022. He arrived at 11 am and was kept till 5:45 pm when he was released after being made to write a statement.

The salt mining industry in Ada has been mired in confusion since ElectroChem Ghana Limited was granted a license to mine salt on an industrial scale in the Songhor Lagoon at Ada. On January 13, 2022, some unidentified thugs attacked  Radio Ada and its staff, amidst a warning to the management of the station to stop its programming on the salt industry.

On August 9, 2021, some citizens of Ada protesting against the operations of ElectroChem Ghana Limited, invaded the premises of the mining firm and destroyed some property. Twenty-three people, including three chiefs, were subsequently arrested and charged.

The May 8, 2022 Facebook post for which Dameh is being harassed contained the picture of a citizen of Ada, Benjamin Anim, who was allegedly being abused by the police at the instance of McDan McKorley, Chief Executive of ElectroChem Ghana Limited. The picture showed Anim handcuffed to a hospital bed, with the accompanying write-up claiming that he had been kept in that state for five weeks and denied access to the lavatory. The story said Anim was arrested in his house after he went to the rescue of a fellow Ada citizen (known to be an active campaigner against the Petrochem deal), who was being assaulted by a gang of non-natives believed to be close to McDan McKorley.

The post titled “Stop the Inhuman Act, MacDan,” triggered Dameh’s troubles at the hands of the police. On May 14, 2022, he received a text message to report at the Regional Police Command and assist in investigations.

When he honoured the invitation on May 16, 2022, Sgt Derrick Debrah informed him the invitation was in connection with the above-mentioned Facebook and followed a defamation petition from ElectroChem Ghana Limited.

Dameh’s lawyer, Martin Owusu, told the MFWA that although his client’s Facebook post mentioned McDan’s name, it did not mention EletroChem Limited. He, therefore, found it strange that his client is being harassed on the basis of a complaint from the company.

“In any case, why do they not file a civil suit for defamation, rather than use the police? I will love that they actually process him to court; it will be very interesting,” Lawyer Owusu said.

The MFWA could not get the police to provide their perspective on the case, apart from a confirmation from the officer handling the case, Sergeant Derrick Debrah that Dameh is being investigated for publication of false news. Sergeant Debrah referred us to the Regional Crime Officer, Chief Superintendent Kwabena Otuo Acheampong. The latter also referred us to the Regional Police Commander, DCOP Mr. Daniel Kwame Afriyie, who said he was yet to be apprised of the full facts, adding that he was making an effort to meet Dameh personally on the issue.

Dameh’s ordeal follows a recent pattern of Police harassment of journalists and activist on false news charges, with the cases often abandoned along the way. On November 1, 2021, the police arrested and detained a radio presenter, Paa Kwesi Simpson, on charges of publishing false news. The arrest followed a false kidnapping claim made by a listener who called into Simpson’s programme.

On February 10, the police detained Kwabena Bobbie Ansah, a presenter at Accra FM, on a charge of “publication of false news and offensive conduct”. The charges relate to a video the journalist posted on social media claiming that President Nana Akufo-Addo’s wife had illegally obtained a parcel of state land.

On February 9, the Executive Director of an anti-corruption organization, Alliance of Social Equity and Public Accountability (ASEPA) was arrested by the police. He had published and later retracted allegations that members of the President’s family travelled by the Presidential jet to the UK for shopping.

The MFWA urges the Police in Tema to stop harassing Dameh for a Facebook post which is clearly of public interest. If the police want to establish that the journalist’s post is false, we expect them to respond publicly to the post and deny the allegations or explain the circumstances surrounding the hospitalisation of Anim and why he was handcuffed to a bed. We deplore the fact that Dameh was detained and subjected to criminal investigations in a jurisdiction where defamation is not a criminal offense. Such actions unnecessarily create public disaffection for the police and affect Ghana’s press freedom image.