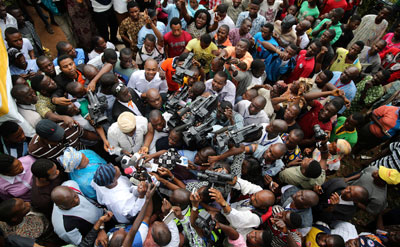 As the global society celebrates the World Press Freedom Day (WPFD) 2020, the International Press Centre (IPC) Lagos, has reminded the Nigerian government and related institutional bodies; the legislature, the judiciary, the security agencies and media associations of the critical role they need to play for the survival of press freedom.  Collectively, IPC says they need to ensure an enabling environment and measures for the safety and media independence of Journalism and media practitioners.

WPFD is a day declared by the United Nations General Assembly to raise awareness on the importance of freedom of the press as enshrined under Article 19 of the 1948 Universal Declaration of Human Rights.

In a statement to commemorate 2020 WPFD, marked every 3rd of May, IPC notes that in line with this year’s theme, ‘Journalism without fear or favour’, the right to freedom of expression and the rights of the press to freely publish, editorialize, critique and inform without fear is a fundamental principle of thriving democracies, and economies of successful governments which must be upheld in Nigeria.

IPC’s Executive Director, Mr. Lanre Arogundade in the statement noted that the government and related institutional stakeholders owe it a duty to respect and uphold press freedom while reaffirming the crucial roles of Journalists and media practitioners, especially as the Coronavirus pandemic ravages the world. He noted the associated crisis of the pandemic have brought to fore the vital roles of the Journalism profession, as purveyors of information, providing scientific and health education to the anxious on the pandemic, alongside deflating misinformation, which in turn save lives.

Mr. Arogundade also observed that the challenges of the pandemic cut across all borders, hence the Nigerian government must not make media practice difficult especially as the media must continually be able to provide information to the public without fear and intimidation.

He however expressed concern that the IPC have monitored and documented at least 22 press freedom violations in the course of the coverage of the COVID-19 pandemic, and enjoins the government to identify the gaps in government and media relations following which it should reinforce its commitment to safety of journalists and other media workers by creating a supportive environment for press freedom in the country; protecting the rights and safety of Journalists and other media professionals while upholding independent and professional Journalism free from political Influence.

“Incessant restrictions and limits to press freedom are evident in the cases of documented attacks including the use of security agents to arrest media workers and perpetrate other press freedom violations and attacks against Journalists. These impediments are also reflected in the government’s denial of access to information by the media, the existence of Cybercrime Act and the Anti-terrorism Act which have been actively used to suppress freedom of expression in the country, and other limitations on the rights of freedom of expression”, Mr. Arogundade stated.

“Government and related institutions must ensure the freedom of the press and remove all impediments to a free press. From recent past, we can see that the proposed National Commission for the Prohibition of Hate Speech bill which prescribes a punishment of life imprisonment for any person found liable of committing this offence and a penalty of death by hanging; the Protection from Internet Falsehood and Manipulation and other Related Offences bill seek to give the authorities arbitrary powers to shut down the internet and limit access to social media, and make criticizing the government punishable with penalties of up to three years in prison, which clearly do not comply with international human rights standards”, he added.

IPC also paid tribute to journalists who have lost their lives in the line of duty regionally and globally while saluting the efforts of journalists currently on the front lines of news reporting on the Covid-19 pandemic.