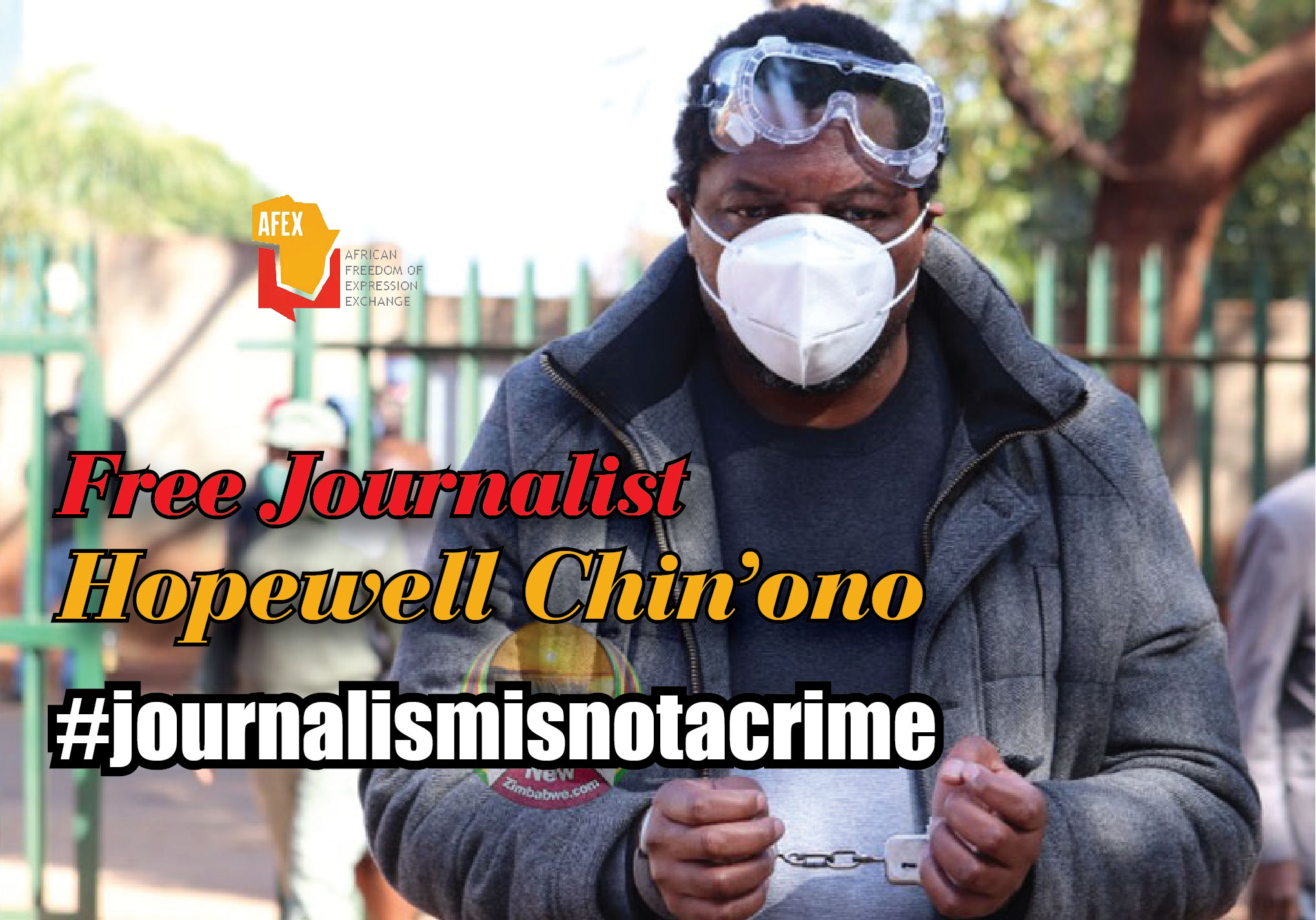 The Africa Freedom of Expression Exchange (AFEX) has petitioned President Emmerson Mnangagwa of Zimbabwe to ensure the release of investigative journalist, Hopewell Chin’ono, who has been detained since June 20, 2020.

Chin’ono was arrested on allegations of inciting violence, which was the authorities’ interpretation of the journalist’s call for anti-corruption protests.

“We are, by this petition, calling on the Zimbabwean government to immediately drop charges against Mr Chin’ono and ensure an enabling environment for journalists to operate without fear of persecution and prosecution,” the petition signed by 15 AFEX members demanded.

The AFEX members also urged President to President Mnangagwa to improve the press freedom situation in the country which is deteriorating.

Kindly read the petition below.

The African Freedom of Expression Exchange (AFEX) presents its compliments to you.

AFEX is a Network of some of the most influential freedom of expression organisations across Africa that work together to promote and improve the press freedom situation on the continent.

We are writing to express our alarm at what we see as the deteriorating environment in Zimbabwe in terms of freedom of expression rights and digital rights of the media over the past few months.

Our member, Media Institute of Southern Africa (MISA) Zimbabwe has recorded a surge in violations of media freedom with journalists being persecuted in the line of duty since the outbreak of the COVID-19 pandemic in the country.

So far, at least 24 violations have been recorded, with a majority of the violations taking place since the implementation of COVID-19 regulations lockdown measures on March 30, 2020. These violations have culminated in the arrest of investigative journalist, Hopewell Chin’ono on June 20, 2020 on allegations of inciting violence through calling for anti-corruption protests.

We are, by this petition, calling on the Zimbabwean government to immediately drop charges against Mr Chin’ono and ensure an enabling environment for journalists to work in, where they shall be free to operate without the fear of persecution and prosecution.

In addition to this, the High Court recently declared that the police and state security officers enforcing the lockdown should not unjustifiably interfere with the work of journalists. We however continue to see an increase in the number of violations against journalists despite the court order.

This is also despite the fact that journalists are legally recognised as providers of essential service during the COVID-19 lockdown in terms of Statutory Instrument 93 of 2020 enacted in Zimbabwe. Journalists continue to play a critical role in information dissemination during these COVID-19 times. It is in the interest of public health and respect for the declaration of rights in Zimbabwe’s Constitution to ensure that media freedom is protected and promoted.

In that regard, we remind the Zimbabwean government that Section 61 of the Zimbabwean Constitution protects freedom of the media and freedom of expression. We urge the Zimbabwean authorities to show a commitment to these constitutionally guaranteed rights by allowing the media to operate freely without any harassment, assault, threats or reprisals for doing their work. All cases of media violations involving police officers and other state security officers enforcing the lockdown should also be investigated.

Your Excellency, upon your assumption of office in 2018, you expressed a commitment to entrench the pillars of democracy in Zimbabwe including instituting media reforms. We urge that these reforms be implemented as a matter of urgency. Such media reforms should also naturally include ensuring there is a conducive environment for the exercise of media freedom.

We reiterate our call to you, Sir, to intervene in the case against journalist Chin’ono to ensure the charges against him are dropped as these charges serve to promote self-censorship and infringe on freedom of expression and media freedom.