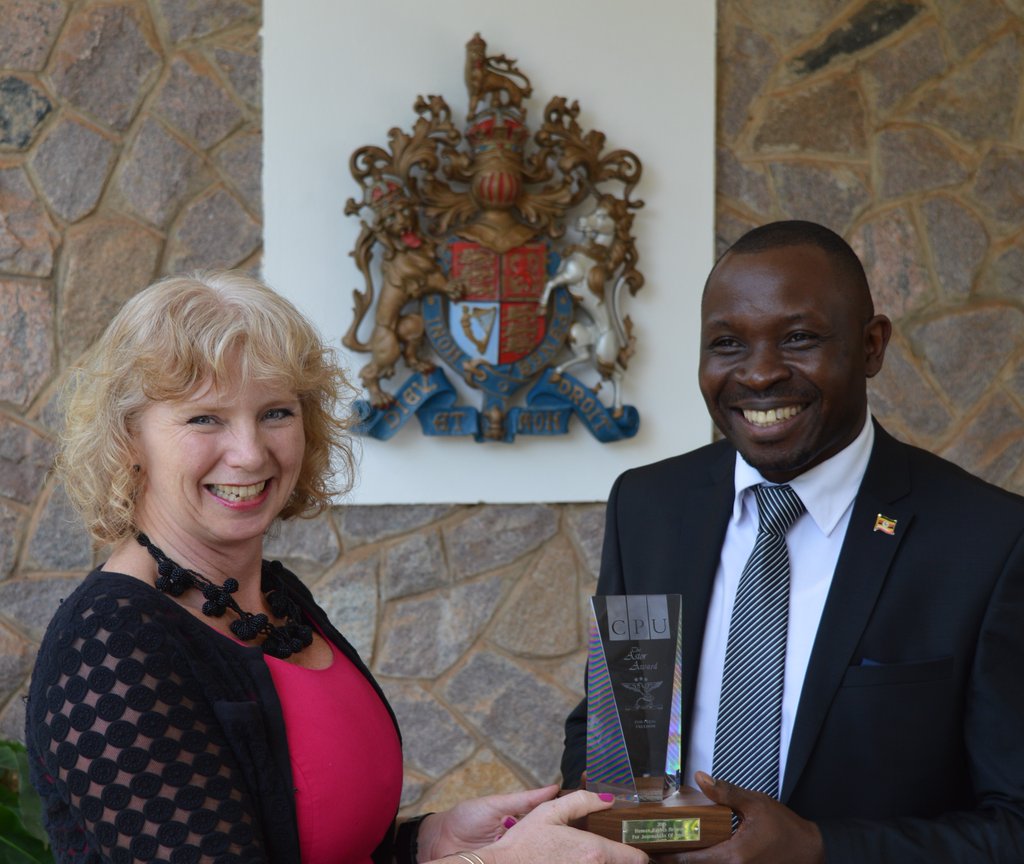 This article was originally posted on hrnjuganda.org on May 5, 2016.

Human Rights Network for Journalists-Uganda (HRNJ-Uganda) on May 5, 2016 has been awarded the Commonwealth Press Union (CPU) Media Trust Astor Award for its outstanding work in protecting freedom of journalists in Uganda. This year’s Award was announced and presented to HRNJ-Uganda by the Chairman of the CPU Media Trust, Lord Black of Brentwood, at a Conference on “The Future of Journalism in the Digital Age” organised by the Commonwealth Journalists Association in London on Monday April 11, 2016.

“My colleagues on the Trust and I have decided that we would like to present the Award this year (2015) to the Human Rights Network for Journalists-Uganda, in view of the tremendous role it has played in fighting for press freedom in very difficult circumstances” . Lord Black of Brentwood told HRNJ-Uganda while breaking the news.

The prestigious Astor Award is one of the oldest press freedom awards in the world. It was established in honour of longstanding President of the CPU David Astor, and first presented in 1970. The Award was last presented in 2005 to Gavin Ellis of New Zealand. HRNJ-Uganda makes Uganda the fourth African country to win the coveted Award after Nigeria (1994), Zambia (1996) and Mauritius (2000). Uganda becomes the 28th winner of the Astor Award.

CPU has been seeking to protect and enhance press and media freedom in the 53 Commonwealth countries for more than a hundred years.

Presenting the Award in London to a distinguished Ugandan journalist Henry Gombya of the London Evening Post, on behalf of HNRJ-Uganda, Lord Black noted that since HRNJ-Uganda was born 10 years ago, it has engaged “in ceaseless battles for freedom of expression”.

“Ten years on, the threats remain and could worsen, following this year’s disputed presidential election. But the landscape has changed. Journalists still face oppression, but they do not stand alone. HRNJ-Uganda, under the leadership of their National Coordinator Robert Ssempala and legal officer Diana Nandudu, are forever by their side – often literally and at personal risk, monitoring journalistic human rights and protecting them from abuse. When police beat up a broadcaster, Ssempala led the protest march – and was himself arrested. When journalists are detained without cause, HRNJ is on the spot with legal advice. One grateful reporter fresh from the cells advised colleagues never to be without the phone numbers of ‘the good men and women of HRNJ-Uganda.’ When HRNJ activists are not on the frontline, they are educating the media on human rights and conducting seminars to raise journalistic standards, reduce risk and promote good governance.” Lord Black said

“The battle for freedom of expression is far from won in Uganda, but the dedicated work of HRNJ-Uganda has helped sustain the will to win against fearsome odds. To succeed as such an indispensable and unflinching friend of press freedom is in the finest tradition of the CPU Astor Awards. It is that triumph which makes Human Rights Network for Journalists-Uganda so deserving of this accolade, and I am delighted to honour them this evening.” Lord Black said in London.

The Award was unveiled to the Ugandan audience by the Deputy British High Commissioner to Uganda, H.E Suzan Schockledge, on May 3, 2016, at the World Press Freedom Day celebrations, held jointly with the African Centre for Media Excellence (ACME) and consortium of other Media and Human Rights Organisations, at Golf Course Hotel in Kampala.

Handing over the Award to Robert Ssempala, the National Coordinator of Human Rights Network for Journalists-Uganda, H.E Schockledge commended the Organisation for its outstanding commitment to defending the Press and Freedom of Expression. She emphasized the need for a free media and underscored its importance in entrenching democracy in a country. She said that the British Government would continue to support initiatives aimed at promoting the respect for fundamental human rights.

Ssempala said the award had not only re-energised the Organisation, but pointed out the enormous challenges facing the media in the country and therefore the need for the various actors to pool their efforts together to defend and promote freedom of expression and the media along with other fundamental human rights. He pointed out the widely entrenched impunity for perpetrators of violence against journalists and the irregular and poor pay of journalists which has crippled the growth of the industry.

In a related development, HRNJ-Uganda celebrated the World Press Freedom (WPF) Day by rewarding seven (7) journalists and a media house for their outstanding reporting on the media freedom and journalists’ rights in Uganda in the year 2015. The inaugural annual HRNJ-Uganda Media Rights Reporters Awards were presented to the winners by the former UN Special Rapporteur on the Situation of Human Rights Defenders, Margaret Sekaggya –who is the Executive Director of Human Rights Centre Uganda. She appealed to the Ugandan authorities to respect freedom of the media and other fundamental human rights.

Johnson Mayamba of the Daily Monitor and Flavia Nassaka of the Independent Magazine were the 2015 HRNJ-Uganda Media Rights Reporters Award male and female winners respectively, while Daily Monitor emerged the best rights reporting media house. The winners were awarded with accolades and cash prize of UGX1,000,000 (USD300) each.

Five (5) other journalists were recognized with Certificates of Merit for their exemplary reporting on media rights and freedoms. They include; Davis Buyondo of the New Vision, Ephraim Kasozi and Teddy Nassaka of the Daily Monitor, Henry Lutaaya of The Sunrise and Kenneth Kazibwe of Chimp Reports.

A panel of five (5) judges led by Lynn Najjemba told the audience that the print media was focused on for the inaugural awards.

Human Rights Network for Journalists-Uganda (HRNJ-Uganda) is a network of human rights journalists in Uganda working towards enhancing the promotion, protection and respect of human rights through defending and building the capacities of journalists, to effectively exercise their constitutional rights and fundamental freedoms for collective campaigning through the media. HRNJ-Uganda is also a member of AFEX.