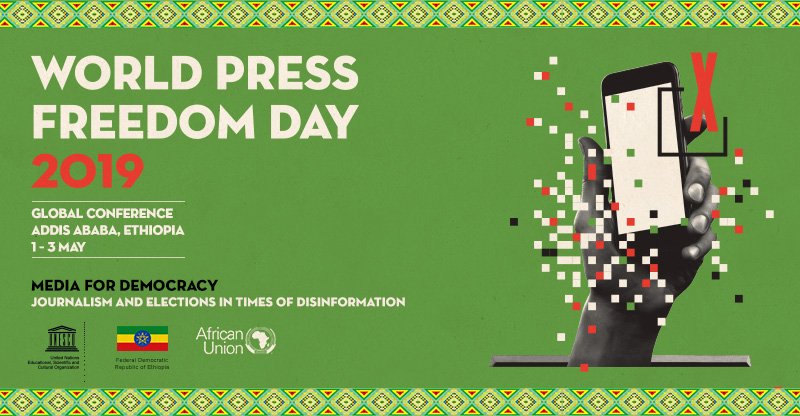 In the next few days, hundreds of stakeholders across the globe will converge in Africa in the Ethiopian capital and host city of the African Union, Addis Ababa, to commemorate this year’s World Press Freedom Day.

Commemorated annually on May 3, since 1993, the day is set aside to celebrate the fundamental principles of press freedom; assess the state of press freedom throughout the world; defend the media from attacks on their independence; and pay tribute to journalists who have lost their lives in the line of duty.

Journalists remain the major drivers and vehicles for advancing the fundamental rights to free expression and access to information in Africa as in other parts of the world. However, the safety of journalists continues to be a huge challenge with increasing reports of attacks such as arbitrary arrest and detention, jailing, physical assault, crippling fines, use of or introduction of laws that are inimical to freedom of expression and even killings, which are used as weapons to silence critical journalism in many countries around the world.

As we prepare to celebrate this important event which re-echoes the indispensable role of the media in advancing freedom of expression and access to information rights, the African Freedom of Expression Exchange (AFEX) presents in this article the various mechanisms available for governments in Africa to actively engage in promoting safety of journalists and the overall freedom of expression situation in their respective countries.

How can African Governments Actively Promote the Exercise of Freedom of Expression Rights and Safety of Journalists?

Firstly, one principal medium where African governments can demonstrate their commitment towards promoting free expression and safety of journalists is by increasingly supporting and co-sponsoring freedom of expression and safety of journalists’ resolutions at various multilateral forums such the United Nations General Assembly, the UN Human Rights Council, among others.

According to our reports, about  11 countries in Sub-Saharan Africa have co-sponsored freedom of expression resolutions since the first resolution was adopted in 2012 in Geneva, Switzerland.

There is the need for more African governments to prioritise the support of such resolutions. When African governments co-sponsor or support freedom of expression resolutions, it makes them accountable in ensuring their implementations. It is therefore important for governments to fully participate in the monitoring and reporting of the implementation of these resolutions, which in essence, is a sign of their commitment to international human rights instruments and frameworks, and in particular, to promoting the safety of journalists and combatting impunity.

Once governments are actively involved in the implementation process, it provides an opportunity for them to be abreast with the challenges and threats that journalists and other media practitioners face at the national level and thus, put in place the necessary measures in protecting journalists.

Similarly, African states should adopt mechanisms to strengthen national data collection, analysis and reporting on the number of verified cases of killing, kidnapping, enforced disappearance, arbitrary detention, torture and other harmful acts against journalists and associated media personnel, in accordance with Sustainable Development Goal (SDG) indicator 16.10.1. It is therefore crucial for African governments to commit more resources to investigating attacks against journalists and providing information regarding judicial investigations on such attacks.

This information should also be shared with relevant actors, including the UNESCO Director-General (DG), the Special Rapporteur on freedom of expression and access to information in Africa of the African Commission on Human and Peoples’ Rights (ACHPR) as part of their periodic safety of journalists’ reports.

For instance, in 2018, the UNESCO Director-General sent requests to 56 member states regarding the killing of 893 journalists out of a total of 1,010 fatalities that UNESCO had recorded between 2006 to end of 2017. Sadly, only five countries in sub-Saharan Africa – Uganda, Kenya, Tanzania, Somalia and Nigeria – out of the 17 that were contacted responded to the UNESCO Director-General’s request.  Such a situation does not reflect well on the continent as it presents a picture of governments that are unconcerned about the high rate of killings of their citizens, particularly in professionals working in a sector touching upon an internationally protected human right.

Additionally, African governments must collaborate with other stakeholders such as civil society actors, journalists and security agents in securing justice for victims of freedom of expression violations as well as victims of other crimes perpetrated against journalists and allied professionals.

Over the years, it has been observed that obtaining justice for victims of crimes against journalists requires a lot of resources, including human and technical support from law enforcement agencies and prosecutorial bodies who are usually tasked with investigating such crimes against journalists and punishing perpetrators. Governments also have financial resources which civil society organisations and media organisations do not always readily have at their disposal to pursue investigations of such crimes to a logical conclusion.

African governments should ensure that their laws, policies and practices are in full compliance with the available international obligations and commitments on the safety of journalists, as required by UN resolutions on freedom of expression and the safety of journalists. This includes the repeal of criminal libel and defamation laws as stipulated in regional, continental and international frameworks. The recent decision of the African Court on Human and People’s rights in 2014 in the case of Konate v Burkina Faso, where the Court ruled that the imprisonment of journalists under criminal defamation laws violates the right to freedom of expression, has removed any lingering uncertainty on this issue.

AFEX urges African countries to support the upcoming resolution on safety of journalists which is expected to be passed by the UN General Assembly at the end of 2019.

African states should support the work of the African Commission’s Special Rapporteur on freedom of expression and access to information in Africa by providing the necessary resources to enable him undertake periodic missions to monitor and address identified challenges in the various countries where there is a deterioration in respect for the right to freedom of expression.

Additionally, we call on governments and other stakeholders to seriously consider the, recommendations and actions contained in statements or declarations issued by the Special Rapporteur.

Nowhere around the world can the work of journalists and other media practitioners be more relevant and important than in Africa which has for long been regarded as the “Dark Continent” because of the level of ignorance that has bedevilled the region.  African leaders must be in the vanguard of charting a new direction for the continent.

We wish you all a fruitful deliberation in Addis Ababa or wherever you may be commemorating this very important day.