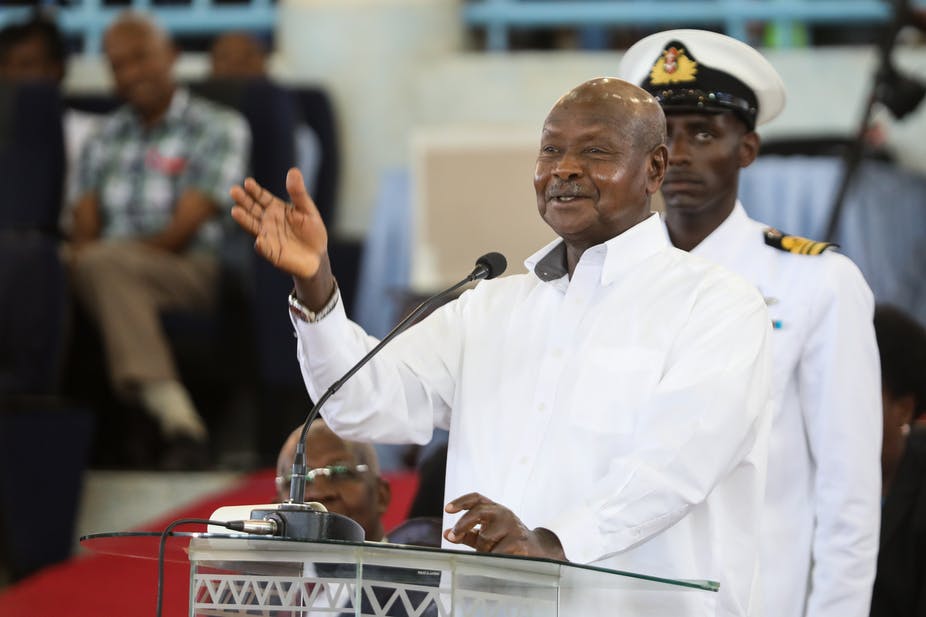 Ugandans go to the polls to elect a President on January 14, 2021, in a tensed context which has seen several journalists assaulted, arrested, and detained for simply doing their work of informing the public and providing a platform for divergent views.

President Yoweri Museveni, 76, has been in power since 1986 and is one of Africa’s longest-serving heads of state. Museveni who ruled Uganda for ten years as a military leader, is running for a sixth term since he secured his first mandate as a civilian president in 1996.

Museveni is competing against 10 other candidates, including MP for Kyadondo East, Robert Kyagulanyi Ssentamu alias Bobi Wine, the presidential candidate of the National Unity Platform (NUP). Bobi Wine has been brutalised and arrested by security forces on several occasions.

Another opposition presidential candidate, Patrick Oboi Amuriat of Forum for Democratic Change (FDC) was also brutalised by the security forces at his party’s headquarters in the south of Kampala on November 3, 2020.

The African Freedom of Expression Exchange (AFEX), is deeply concerned about the continued abuse of human rights in the country and urges the Ugandan authorities to protect the safety of journalists and uphold press freedom during and after the polls.

The government has in recent years demonstrated gross intolerance for independent media reportage. State security forces have descended heavily on journalists who are merely doing their work. During the last two months for example, the police has used brute and excessive force against several journalists reporting on activities and campaigns of opposition politicians.

On November 18, 2020, Ashirat Kasirye, a journalist working with Ghetto TV, was nearly killed after being pepper-sprayed and left unconscious by police officers during the arrest of prominent opposition figure, Robert Kyagulanyi Ssentamu, popularly known as Bobi Wine.

On December 6, David Lubowa, a photojournalist with Daily Monitor was assaulted by the police in Jinja district. Lubowa was covering the campaign trail of Bobi Wine while the police attacked him with a teargas canister.

Five days later, on December 11, the police attacked six other journalists who were also covering the campaign procession of Bobi Wine. A standoff ensued between the security forces and the sympathizers of the presidential candidate as the security agents attempted to prevent them from holding their rally in the Alebtong District. In the ensuing scuffles, Moses Waisswa of Busoga One FM, Batte Ssesanga of BBS Terefayina, John Cliff Wamala of NTV, and David Tamale of Bukede TV were mercilessly beaten up by security forces.

Two other journalists, Jonathan Tusingwire and Richard Kalema of Ghetto media, were also manhandled. The journalists sustained serious injuries and were rushed to the hospital.

On December 27, the police fired teargas canisters at journalists, hitting and injuring at least three of them in the Masaka district. Kasirye Saif-Illah Ashraf, a journalist with Ghetto Media, was hit in the head. Ali Mivule, a reporter with the private media NTV Uganda, was hit in his thigh and sustained severe pain and swelling. Also, Daniel Lutaaya, a journalist with NBS TV was brutally assaulted by the police.

In Kalangala, Central Uganda, the police on December 30, arrested and detained Derrick Wandera and Culton Scovia Nakamaya, two journalists, working respectively for the newspaper Daily Monitor and BBS Terefayina TV. The two journalists were released few hours later but were interrogated by the security agents about their social media publications. The secutity agents accused them of inciting to violence by covering live Bobi Wine arrest and profiling negatively the police.

On January 1, 2021, in the northern Nebbi District, a police officer damaged the camera of Dedan Kimathi, a journalist working with the news online ChimpsReport. After damaging the camera, the security agents forced him to delete the picture he has been taking.

Abusing journalists for simply doing their work is unacceptable. We therefore call on the government of Uganda to call the errant security officers to order and take further steps to ensure the protection and safety of journalists at all times. Journalists play a crucial role in elections. This include shedding light on the various stages of the electoral process, thus promoting transparency, fair play and accountability on the part of the election stakeholders and the various actors. This is a fundamental requirement for credible elections and consolidation of democracy.

The government of Uganda has a history of shutting down the internet during elections. In two instances, on February 18 and May 2016, the Ugandan government shut down the internet and restricted access to social media platforms. The first internet blackout took place on the eve of the presidential election in 2016 and lasted for four days. Two months later, the second social media blackout targeting Facebook, WhatsApp, and Twitter, and mobile money transfers took effect.

In view of the above, AFEX joined other 55 organisations across the globe to urge the Ugandan authorities to keep the internet on before, during, and after the election. Particularly the government of Uganda should: