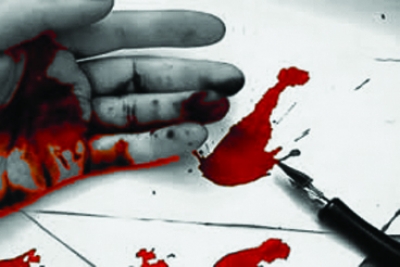 MISA-Zimbabwe Chairperson Kumbirai Mafunda has urged Police Commissioner-General Augustine Chihuri to investigate and bring to account members of his force involved in the assault of journalists conducting their lawful professional duties.

In his report to the MISA-Zimbabwe Annual General Meeting in Harare on 20 August 2015, Mafunda said:

“While cases pertaining to media freedom violations are somewhat on the decline, we are concerned that a number of the violations involve the assault and harassment of journalists  by security personnel.”

He cited the assault of journalists Angela Jimu, Privilege Musvanhiri, Justin Mutenda, Tapiwa Zivira, Phillimon Jambaya, Edgar Gweshe and Crispen Ndlovu, as some of the cases that immediately come to mind involving the police, municipal police and other security personnel.

“We condemn these wanton acts of impunity and gross violations of journalists’ constitutionally guaranteed right to media freedom.

“We also condemn in the strongest of terms the continued use of AIPPA (Access to Information and Protection of Privacy Act), to curtail media freedom through undemocratic media registration requirements, which are patently unconstitutional and in conflict with regional and international best practice in promoting media freedom and diversity,” said Mafunda

The MISA-Zimbabwe Chairperson said the recent arrest and conviction of Patrick Chitongo under AIPPA, was a graphic reminder of the severity of challenges that still confront Zimbabwean journalists.

“I therefore implore the Zimbabwean government as a prominent member of regional bodies such as SADC and the African Union, to demonstrate exemplary leadership.

“Respect for rule of law and fundamental human rights is key to the rebranding and repositioning of Zimbabwe if the country is to retain international goodwill and attract desperately needed foreign direct investment critical to resuscitating the ailing economy,” he said.

He urged journalists to be on the frontline in defending the media democratic space.

“We should write and report on these issues. Lets do it on Twitter, Facebook, Whatsapp and on the basis of the IMPI report’s findings and recommendations. As journalists and media practitioners we should take the lead in utilising these social media tools in amplifying our calls and demands for comprehensive media reforms.”

On the closure of the Zimbabwe Mail and Southern Eye newspapers, and the subsequent firing of scores of journalists and media workers from both the private and public media in the wake of the recent Supreme Court ruling, he said:

“The media sector in Zimbabwe …  cannot be allowed to die given the hunger for information that is out there and more-so in a country seeking solutions to its socio-economic and political ills.

MISA is a regional non-governmental organisation with members in 11 of the Southern Africa Development Community (SADC) countries. Officially launched in September 1992, MISA focuses primarily on the need to promote free, independent and pluralistic media, as envisaged in the 1991 Windhoek Declaration.