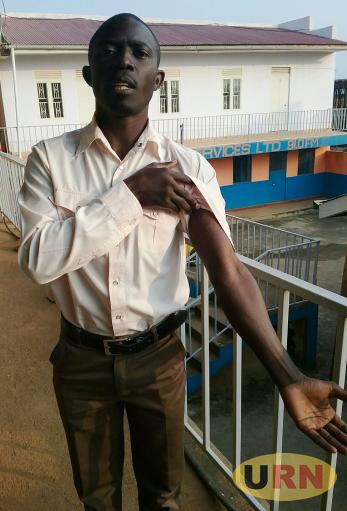 This Alert was originally published by HRNJ-Uganda on January 13, 2016.

Golooba was covering a political rally in which Mbabaali launched his campaigns. He told Human Rights Network for Journalists-Uganda (HRNJ-Uganda) that the men dressed in black asked him why he was recording their candidate’s speech. “I was recording Hajji Mbabaali’s speech from one of the loud speakers when one of his private security guards with black sunglasses confronted me demanding to know why I was recording their candidate. As I explained myself, about five others pounced on me and started kicking, boxing and slapping me. They grabbed my audio recorder which they confiscated.” Golooba told HRNJ-Uganda

He said that the scuffle lasted for over ten minutes as the men roughed him up and tried to whisk him away, but saved by other journalists and some of Mbabaali’s relatives. The rally was interrupted because of the scuffle. He told HRNJ-Uganda that he sustained an injury on his right leg as well as pain in his chest and the back because of the beating.

Golooba reported a case of assault at the Masaka Central Police Station. He has over five witnesses ready to record statements. Four other journalists have been attacked by politicians and or their supporters during campaigns in the same region since the NRM party primaries in September last year. Two cases have since been taken to court.

“HRNJ-Uganda condemns the blatant attack of journalists on duty by political contestants, their supporters and mainly the police. These cases should be investigated and the perpetrators punished. HRNJ-Uganda will work with the victims to pursue justice.” Said the HRNJ-Uganda National Coordinator, Robert Ssempala