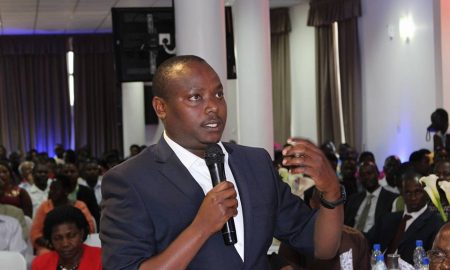 The Minister for Water Resources and Member of Parliament for Mukono North Constituency, Honourable Ronald Kibuule is reported to have threatened the correspondent of Bukedde Television, David Musisi Kalyankolo for reporting on a land dispute involving the Minister and residents of Kigaya in Buikwe District in Eastern Uganda.

According to a member of the African Freedom of Expression Exchange (AFEX), Human Rights Network in Uganda (HRNJ-Uganda), the journalist on October 13, 2017, had contacted the minister for his reaction to the reported killing of one Dickson Wasswa Mboowa, a resident of Kigaya by police officers he (the minister) had deployed to guard the disputed land.

“I called the Minister to get his side of the story about the demise of Wasswa but he threatened me that I was dealing with an influential person and he would teach me a lesson if I went ahead and aired the story”, Musisi Kanyankolo told HRNJ-Uganda.

Hon. Kibuule allegedly bought from Musa Kateregga, a resident of the area, an 85-acre land located at Kigaya Landing site in Najja subcounty in the Buikwe District.

The minister is reported to have evicted tenants on the land without compensation in violation of one of the terms in the contract.

Asked if he would continue following up on the story to its end, Musisi insisted that he would not give up on his duty to provide the public with information. He added that the fact that the Minister does not dispute the facts as aired in the story proves that there is an issue to pursue.

AFEX condemns the threat issued by the Minister against the journalist for doing his duty of reporting on a public interest matter. We urge the authorities to call the minister to order and to ensure the security of Musisi. AFEX also calls for investigation into the alleged killing of the tenant by the police and subsequent redress of the violation. We commend Musisi for his perseverance and determination to pursue the story to its logical conclusion.