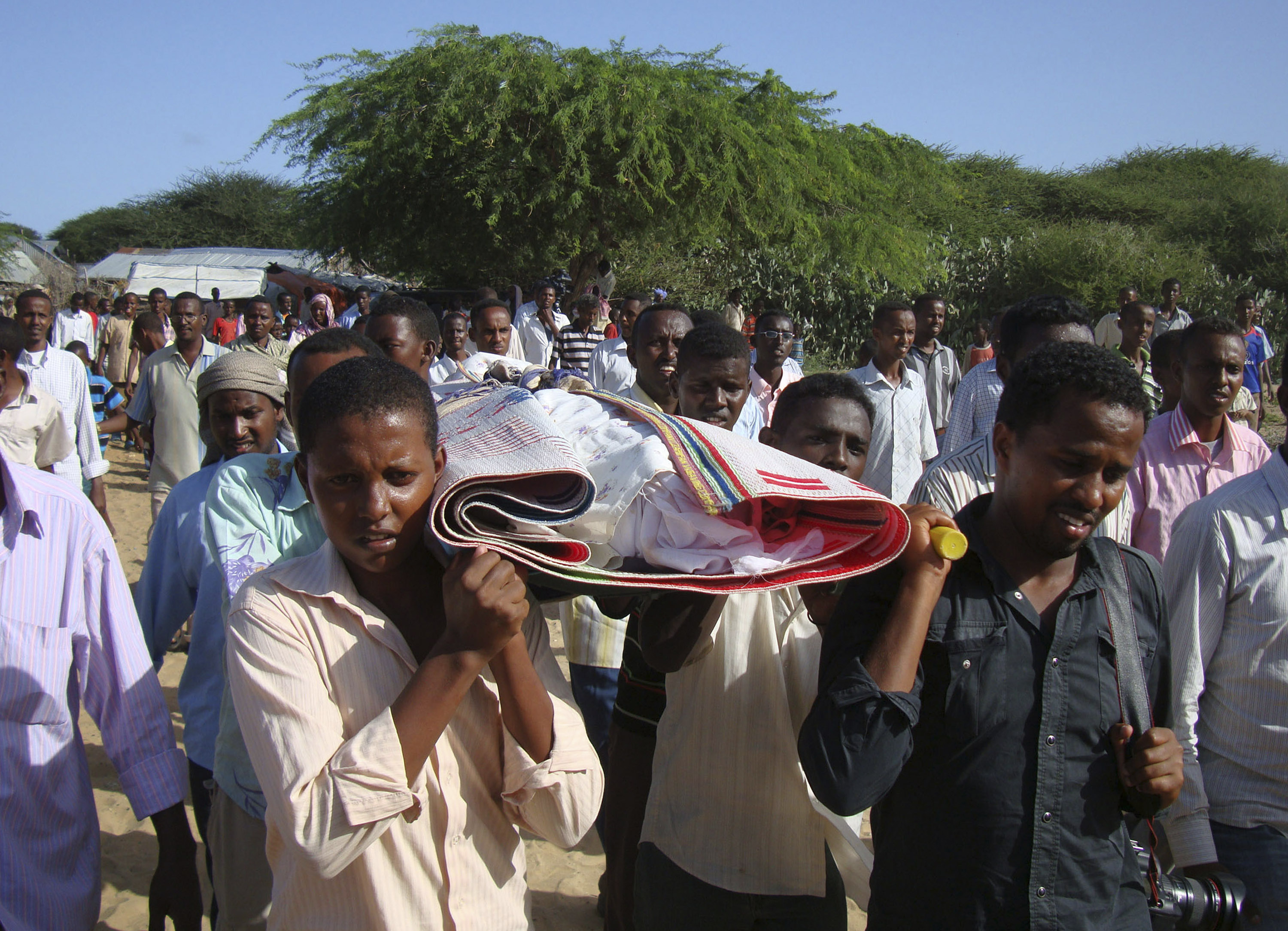 Somalis and local journalists carrying the body of murdered journalist for burial in Mogadishu in 2009. (AP Photo / Farah Abdi Warsameh)

Journalists continue to face danger while reporting in conflict zones across the Horn of Africa region. Several journalists have been physically assaulted, arrested and in some cases killed in their quest to bring information to the citizenry. Two journalists have died in line of duty between August 25, 2017 and September 14, 2017, in Somalia and South Sudan.

Having earned the reputation for attacking journalists and ordinary citizens, insurgents in Somalia struck again on September 10, 2017, in Beledweyne town, Central Somalia resulting in injury of some journalists one of whom later died of severe head injuries. Six other persons were killed during the blast leaving several others injured.

The three journalists, Abdishakur Mohamed Hassan working with Saab TV, Abdulkadir Omar Ibrahim a reporter of RTN TV and Abdullahi Osman Moallim working with Jubaland TV were waiting at the Siligga restaurant  to cover local politicians at when the bomb detonated. Moallim, a 24 year old later succumbed to his head injuries at the Recep Tayyip Erdogan Hospital in Central Somalia on September 13, 2017.

“Before the blast I was living with relative happiness.  Now I’m in a state of shock and morally destroyed, not only the wounds of the blast, but the loss of my colleague Abdullahi Osman Moallin who succumbed to his injuries.  This has huge impact on my life.  Not to trust where people gather in large number.  In other words, my work of reporting will be jeopardized by this experience forever. The worst of all is, the physical wound can be treated, but the moral wound will stay persistently”, he told AFEX.

In a similar incident, Christopher Allen, a freelance journalist and US citizen was shot dead while covering a conflict in Kaya, South Sudan on August 26, 2017. Allen was – caught in crossfire as government forces exchanged fire with rebel elements near the border with Uganda.

The issue of safety of journalists needs urgent attention on the continent especially in conflict-zone areas. The killing and maiming of journalists, sometimes deliberately, during conflicts is unacceptable. Journalists should be free to carry out their watchdog role.

The African Freedom of Expression Exchange (AFEX) and its members, National Union of Somali Journalists (NUSOJ) in Somalia and Association of Media Development in South Sudan (AMDISS) urge the governments in the two countries to take drastic actions to protect journalists as well as open judicial investigations into the deadly violence against journalists.

We encourage media owners and media workers in the two countries to also take precautionary measure while covering conflicts.