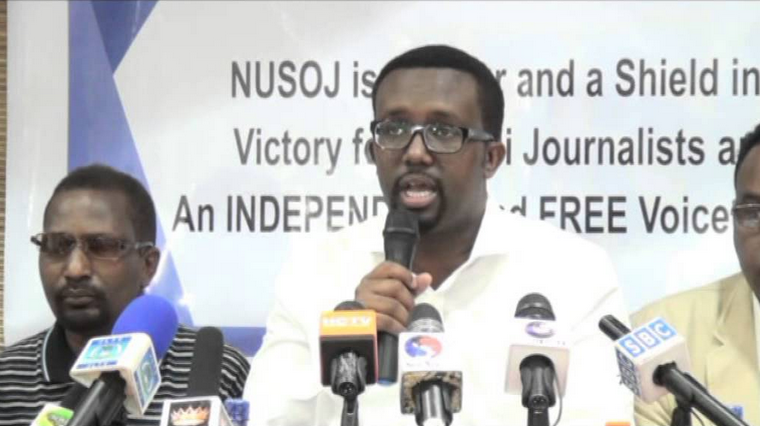 This statement was originally published on NUSOJ on 15 August 2016.

A series of court cases filed against journalists and independent newspapers in Somaliland constitute judicial harassment and should be dropped immediately, the union demanded today.

Mohamed Mohamud Yusuf, Editor-in-chief of privately owned Foore newspaper and Abdirashid Abdiwahab Ibrahim, reporter & manager of Foore newspaper, are both facing criminal persecution. Ibrahim was arrested on 29 May 2016 by Somaliland security service at Hotel Imperial after Foore newspaper published on 28 May 2016 a report entitled “Is it true that 15% of 35% Somaliland is due to receive from DP (Dubai Port) for managing Berbera port will go to the family of Somaliland President Silanyo and their closest ministers”. Ibrahim, who was detained at terror Unit of Crimes Investigations Department (CID), was released on 1 June on bail. But the Attorney General pressed criminal charges against Ibrahim and Mohamed Mohamud Yusuf, editor-in-chief of Foore newspaper. The charges include publication of “false news” against the president’s family & Somaliland ministers, disturbing public order, anti-national propaganda and public incitement through fabrication. The hearing of the case was concluded and judge has retired to consider the evidence and provide a judgement.

Ogaal Newspaper and its editor-in-chief, Muse Farah Jambir, are in trail after they were accused by Attorney General of Somaliland for “defaming and smearing the President and the First Lady of Somaliland” by publishing “false news” over privatization of Petroleum tanks in port city of Berbera and alleged “interests of Somaliland’s first family” in these deals with businessmen. The journalist and the newspaper are both facing criminal libel charges at Marodi Jeh Regional Court in Hargeisa. The complainants of this case are President and first lady of Somaliland, and defendants are Muse Farah Jambir and Ogaal Newspaper. The case has been adjourned until for further mentions. Ogaal is still publishing.

Abdirashid Nur Waeys and Said Khadar Abdullahi, chairman and editor-in-chief of Hubsad newspaper respectively, are in court for allegedly publishing a newspaper which has “no license” to operate, according to charge sheet of Somaliland Attorney General. Somaliland closed down the newspaper and ordered printing houses not to print this newspaper. Waeys and Abdullahi were both arrested and detained for 7 days, before they were released on bail. The hearing of the case was concluded and jury has retired to consider the evidence and provide a judgement.

“We strongly protest the judicial harassment of Somaliland journalists and independent newspapers through ongoing criminal persecution. These are bogus, frivolous and vexatious legal cases which are intended to censor, intimidate and silence independent media, and to instill fear among independent journalists to who dare to speak truth to power,” said Omar Faruk Osman, NUSOJ Secretary General.

NUSOJ considers the ongoing judicial harassment a determined move from the side of Somaliland authorities to divert journalists’ time, energy and resources away from their independent media work. The union also received credible reports that all judicial proceedings against journalists and their papers are not carried out in full compliance with their right to a fair trial, as protected under international law, given that the litigants are from Somaliland political figures and government officials.

“The ongoing judicial harassment is indicative of a desire on the part of the authorities to restrict free press, and is a threat to the essential reporting that holds public officials to account,” declared Osman.

Journalists in Somaliland are particularly disturbed by the frequent use of penal code to persecute independent journalists and newspapers by fear, intimidation and burdening them with the cost of a legal defense until they abandon their independent reporting, instead of using Somaliland’s media law. The penal code criminalizes “defamation” and “false news”.

“We call on Somaliland authorities to drop all charges levelled against journalists and their media houses because of their media work, and ensure protection for journalists and independent media from any judicial harassment and persecution in relation to their media activities,” added Osman.

NUSOJ documented several cases of journalists in Hargeisa and Borame who were journalists were and detained because of their reports.