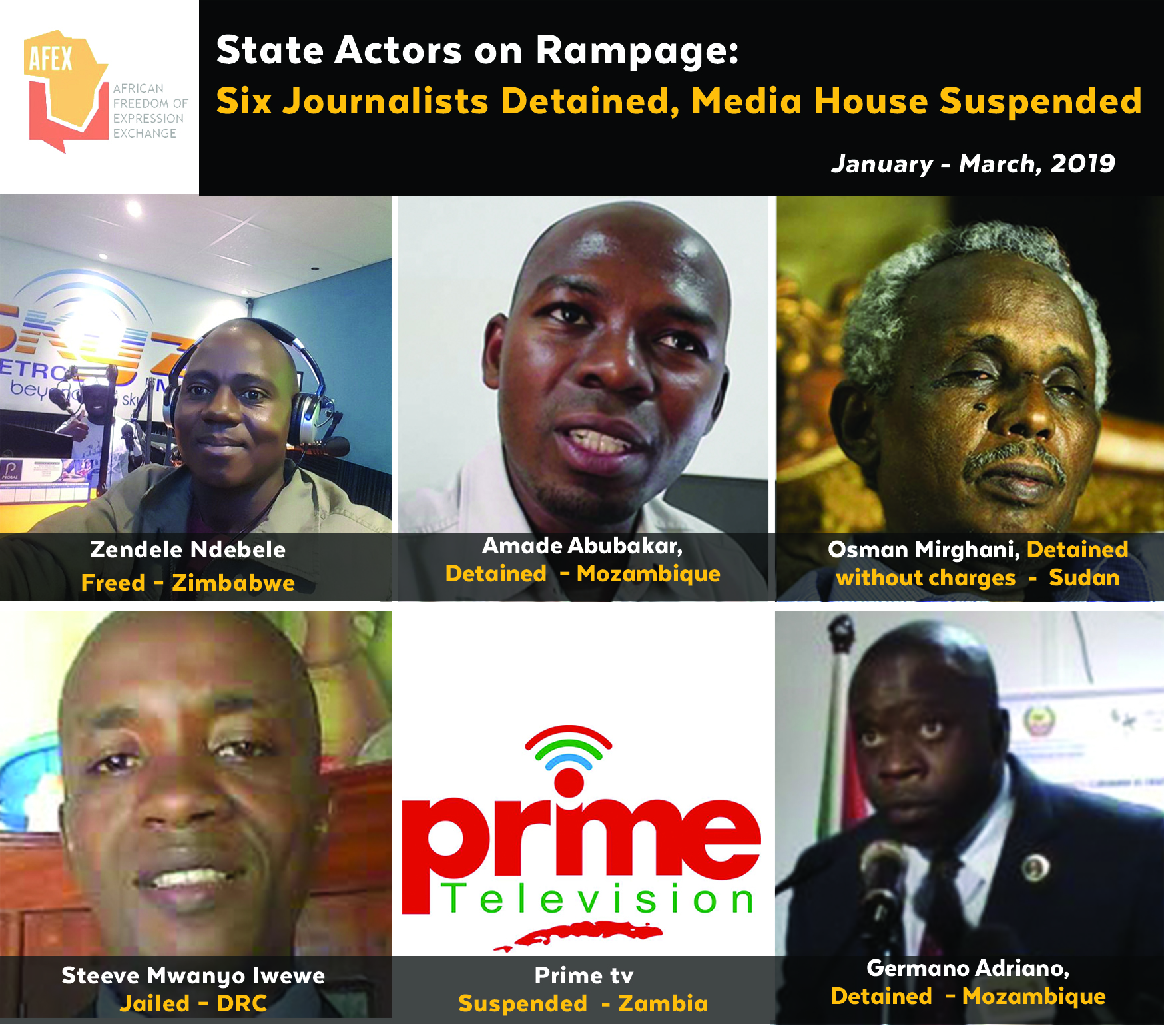 The right to freedom of expression and access to information is enshrined in the national constitutions of several African countries who are also signatories to other regional and International frameworks such as the African Charter on Human and People’s Rights, Universal Declaration on Human Rights and the International Covenant on Civic and Political Rights.

However, a series of press freedom violations in five countries in Central, East and Southern Africa recorded since January 2019 appears to call into doubt governments’ commitment to upholding the above frameworks. Within the period under reference, four journalists have been arbitrarily arrested and detained, another journalist sentenced to a year in prison while one media house has been suspended for critical reportage about state officials.

In the latest incident recorded by the African Freedom of Expression Exchange (AFEX), state security agents on March 21, 2019 arrested and detained Zenzele Ndebele, a civil society activist and freelance journalist at the central police station in Harare. Ndebele’s arrest followed the discovery of used teargas canisters after police searched his car when he arrived at the State House for a meeting between President Emmerson Mnangagwa and civil society organisations in Zimbabwe. Ndebele explained that he had picked up the canisters, which had been fired by the police, during the last public protest in January which he was filming.

However, the police dismissed his explanation and charged him with “possession of offensive weapons at public gatherings,” under Section 43 of Zimbabwe’s Criminal Law Code.

According to the Zimbabwe chapter of MISA, Ndebele’s home and office were also raided. Sautsani Ali, the cameraman of the activist was also briefly detained. Meanwhile Ndebele himself was freed and all charges dropped against him after appearing in court earlier today (March 22, 2019).

Abubacar appeared before court on January 18, 2019 and was denied bail. He has since been in detention without any charges brought against him. According to local media report, Abubacar has been subjected to inhumane treatment including torture and is being denied food while at the Cabo Delgado detention centre. .

Another journalist, from the same community radio station where Abubacar works, Germano Daniel Adriano was also arrested on February 18, 2019 by military personnel in the same region for covering similar attacks against residents of that part of the country.  According to a statement from AFEX member, Mozambique chapter of the Media Institute of Southern Africa (MISA), both journalists have since been charged with “violation of state secrets using a computer” and “public instigation to crime using a computer”.

The arbitrary arrest and detention of journalists continued, this time in Sudan, where, on February 22, 2019, agents of the feared National Intelligence and Security Service (NISS) arrested and detained incommunicado Osman Mirghani, editor-in-chief of the independent Sudanese newspaper, Al-Tayyar. Although no charges have been brought against Mirghani, the authorities have continued to detain him. The journalist’s ordeal is believed to be in connection with comments he made that seemed to support the ongoing anti-government protests in Sudan.

According to AFEX sources in Sudan, Mirghani’s health is deteriorating as he is unable to access adequate medical attention while in detention.

While his colleague’s in Mozambiaque and Sudan are languishing in detention without trial, Steeve Mwanyo Iwewe, a journalist who works with Radio-Television Sarah (RTS) in the Democratic Republic of Congo (DRC), was on March 1, 2019, sentenced to a year in prison after a ‘hasty’ trial by the Mbandaka Peace Tribunal. Iwewe, who was accused of “insulting” Bobo Boloko Bolumbu, the governor of the north-western province of Ecuador was also ordered to pay a fine of $200 to the complainant.

Iwewe was arrested on February 27, 2019 for defying the governor’s orders to stop covering a public protest in the province.

“You came here to do your work, let me also do mine freely (…)”, the journalist reportedly told the governor in response to the latter’s orders, a remark the official felt to be insulting.

The governor’s order clearly amounted to censorship and a violation of Article 24 of the Congolese Constitution which guarantees press freedom. Iwewe’s incarceration betrays serious gaps in the Congolese criminal justice system.

Unlike the three cases reported above which involved journalists, the fifth violation which was recorded in Zambia targeted a critical media outlet. Again, unlike the earlier cases where security agents were the major perpetrators of the violations, this time the violator was the Independent Broadscasting Authority (IBA), the institution mandated to regulate and protect the media in Zambia. On March 4, 2019 the IBA ordered the suspension Prime Television for 30 days after it accused the station of exhibiting “unprofessionalism in its broadcasting.”

Prior to its suspension, Prime TV station was subjected to series of attacks including verbal and physical assaults from high ranking government officials following the station’s reportage of the recent parliamentary by-elections in Sesheke which was marred by violence.

The above incidents highlight the increasing intolerance of independent and critical journalism by some governments on the continent. The African Freedom of Expression Exchange (AFEX) is deeply concerned about the above incidents and condemns the increasing rate at which governments on the continent are quick to penalise journalists who are critical of their policies or practices.

We call on the states concerned to unconditionally release the journalists being held in their countries. We urge African governments generally to respect the right to freedom of expression and divergent opinion in line with their obligation under their national constitutions and other regional and international frameworks to which they are signatories.

AFEX appeals to security agencies to do their work independently and professionally by resisting illegal orders from the Executive to perpetrate violations against journalists and activists.

AFEX also urges the judiciary of the various countries to uphold press freedom and human rights by rejecting frivolous charges against journalists and dissidents.