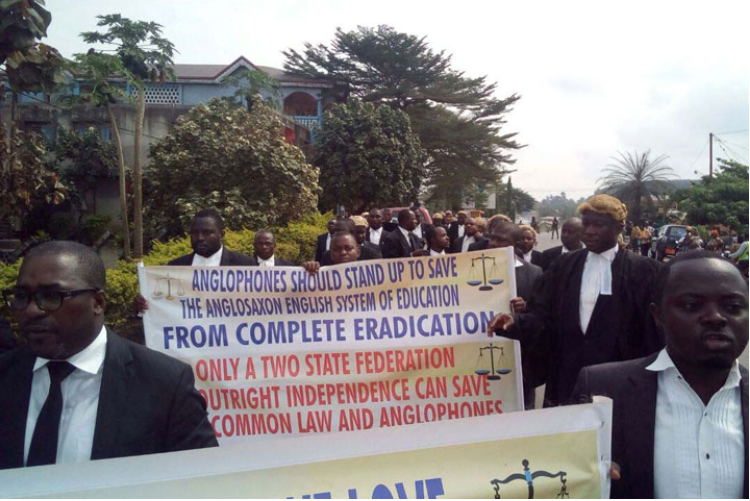 The African Freedom of Expression Exchange (AFEX) is concerned about the deteriorating freedom of expression and press freedom situation in Cameroon amidst ongoing protests in the two English-speaking regions of the country.

Since November 2016 there have been series of protests and strike actions in the English-speaking North-west and South-west regions stemming from the government’s decision to introduce the use of French language in courts and in schools of the two regions.

Cameroon is made up of ten regions, eight of which are predominantly Francophone regions whilst two are Anglophone.

In the government’s attempt to bring calm to Bamenda and other parts of Cameroon, there have been reports of freedom of expression and human rights violations between November 2016 and January 2017.

Local media reported that in an attempt to disperse protesters on December 8, 2016 Cameroon’s security forces fired live bullets and teargas which resulted in the death of four people leaving several others injured.

According to media reports, on January 11, 2017, police stormed the premises of Radio Hot Cocoa and ordered the suspension of all activities of the station until further notice. The station was accused by the governor of the region, Adolphe Lele Lafrique of inciting tensions among Anglophone residents in a call-in radio discussion about the ongoing teachers’ strike in the region. Teachers and lawyers have been on strike for the past three months in protest of the imposition of French language in educational and judicial institutions in the two regions.

In a similar development, the Divisional Officer of Jakiri, Mr Ngembane Daniel Ekole, on January 12, 2017 ordered the closure of Jakiri Community Radio station, following the broadcast of a message by a Member of Parliament (MP), Joseph Wirba. The MP’s message called on the people to mobilise at the Kumbo Square, headquarters of Bui Division to discuss the crisis in the affected regions. The station was however reopened the following day (January 13).

Aside the violations mentioned above, there have been reports of internet disruptions since January 17, 2017 in North-western and South-western regions, according to AFEX sources in Cameroon. At the time of writing this statement, internet connection was still unavailable in these regions.

Meanwhile, two leaders of the Consortium, Dr. Nkongho Felix Agbor-Balla and Dr. Fontem A. Neba were also arrested on the same day (January 17, 2017) and are currently still being detained. There have also been reports of mass arrests following the ban on the consortium and its activities.

Violating the rights of citizens in the process is therefore unacceptable and contrary to the provisions of the constitution of Cameroon as well as other regional and international instruments mentioned herein. It is therefore imperative for the government of Cameroon to take urgent steps to remedy the situation and demonstrate its commitment to these regional and international frameworks by observing them fully in practice.

The African Freedom of Expression Exchange urges the government and the aggrieved citizens to resort to dialogue in resolving this issue to ensure that human rights are respected and upheld in Cameroon.