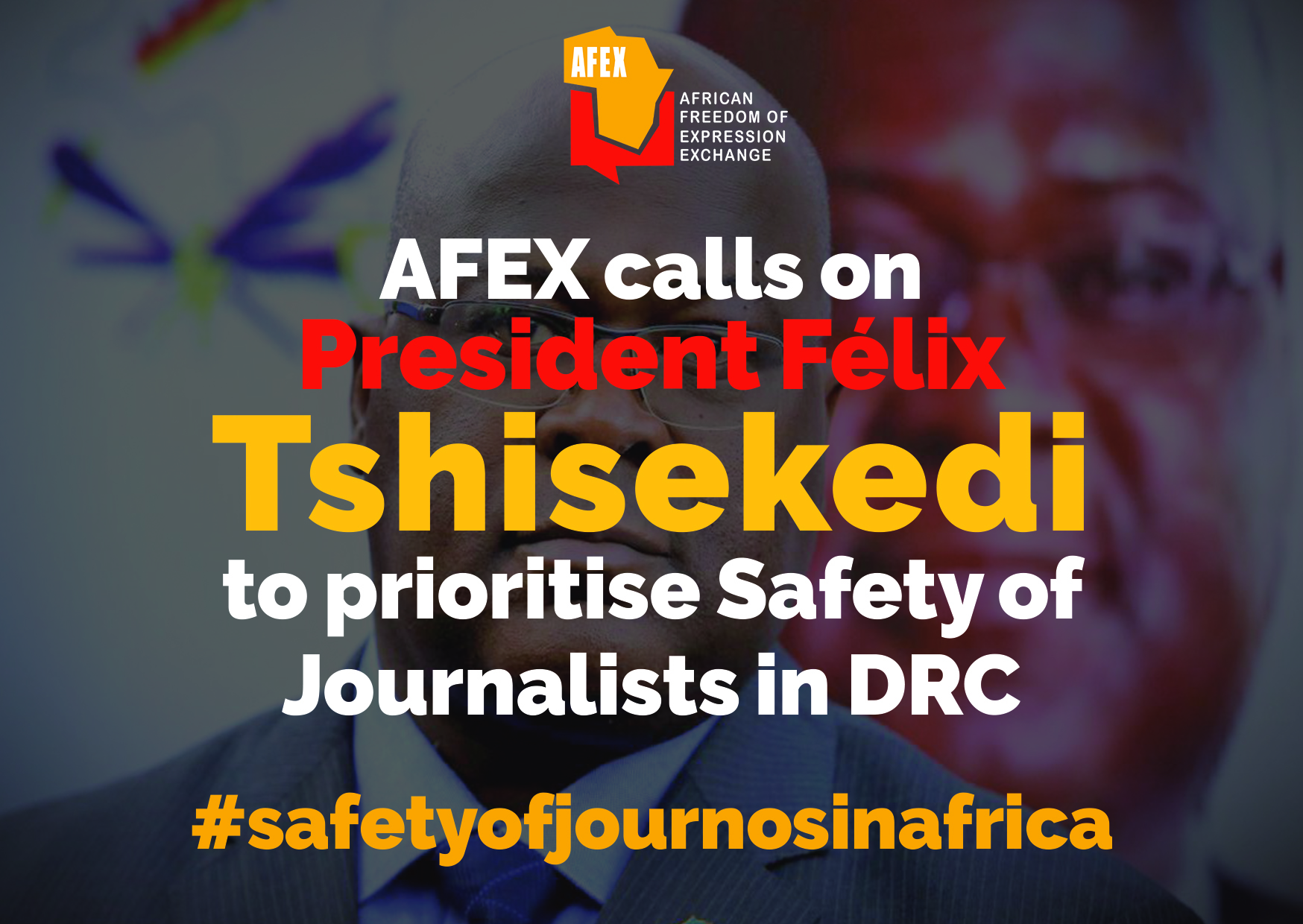 The African Freedom of Expression Exchange (AFEX) has joined Journaliste en Danger (JED), its member organisation in the Democratic Republic of Congo to call on President Félix Antoine Tshisekedi to prioritise the safety of journalists and adopt concrete steps to put an end to the pervasive culture of impunity for crimes against journalists in the country. The call was made following the publication of a report by JED titled, “Safety of Journalists and the Issue of Impunity for Crimes against Journalists in DRC – January 2017 – May 2019” which highlights the press freedom situation in the country from January 1, 2017 to May 3, 2019.

According to JED, although the press freedom situation over the past six months has witnessed an uneasy calm, attacks against journalists in the DRC remain alarming.

The report said a total of 37 press freedom violations mostly targeting journalists, were recorded from January 1 to May 3, 2019 as compared to 44 cases during the same period in 2018. A total of 121 violations each was recorded in 2017 and 2018.

According to the report, the Congolese government has failed to adopt concrete steps to promote the freedom of expression and press freedom particularly, the safety of journalists resulting in a culture of impunity that nurtures increased violence against journalists in the country.

The report also lamented the use of out-dated laws which were adopted under the military regime to stifle media freedom and harass journalists working in the country.

“Up till today, the DRC still relies on an obsolete law adopted under the dictatorship of Marshal Mobutu in 1996, which imposes prison sentences and heavy fines for defamation of government officials or influential individuals. This law thus threatens and limits the enjoyment of freedom of expression and its corollary, freedom of the press, on one hand, and gives public and private officials sufficient leeway to attack journalists, on the other hand,” says the Report.

The JED report also bemoaned the fact that none of the recommendations made to the Congolese government during its last Universal Periodic Review (UPR) before the UN Human Rights Council meeting in 2015 has been implemented.

AFEX therefore joins JED to urge President Tshisekedi to take urgent steps towards improving the press freedom and safety of journalists situation in the DRC. We appeal to the President to respect his commitment to making the media a « Fourth Estate of the Realm » as indicated during his inauguration in January 2019 by prioritising the safety of journalists’ situation and issue of impunity in the country.

In addition to the above, we call upon the Congolese government to consider the following recommendations:

–        Raise awareness among security forces and judicial actors about the rights and duties of journalists and their duty to uphold such rights;

–        Ensure that security agents protect journalists and refrain from perpetrating violence and other forms of abuses against them;

–        Establish a multi-stakeholder national mechanism on the safety of journalists;

–        End impunity for crimes against journalists by reopening investigations into the killing of journalists during the former regime and ensure that the perpetrators are identified and punished accordingly.

This report was produced with support from the African Freedom of Expression Exchange (AFEX) as part of the its campaign to promote safety of journalists and combat impunity in Africa.  Similar reports will be produced and publicised by AFEX and its member organisations in eight other African countries including Cameroon, Nigeria, Uganda and Tanzania.