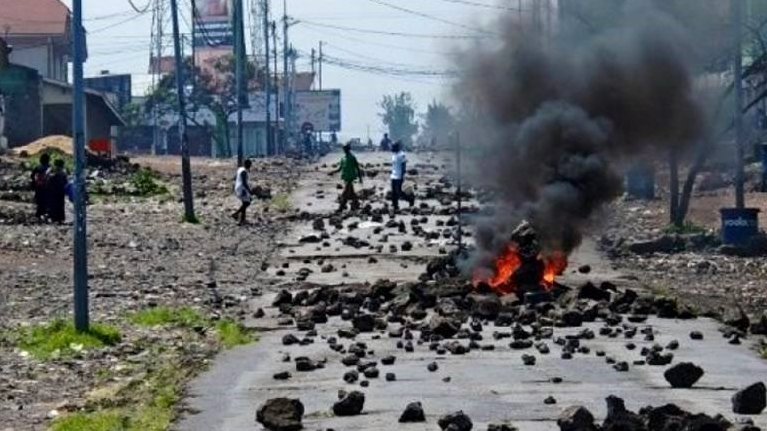 Chaotic scene on a street after deadly clashes in DRC on September 19, 2016. Photo: Papy Okito

The African Freedom of Expression Exchange (AFEX) is deeply appalled by the brutality of the Congolese police against peaceful demonstrators in the Democratic Republic of Congo (DRC).

On September 19, 2016, demonstrations in capital city Kinshasa and other cities turned deadly when security forces opened live bullets at protesters. Reports say while the demonstrations were going on, a number of protesters begun setting fire to properties belonging to major political parties in the country. The police on duty to ensure a protection of life and property reacted by firing live bullets at the protesters resulting in deaths and serious injuries.

The government has reported that the death toll is 32 including 3 police officers but warns that the numbers could rise. Opposition politicians however peg the death toll at over 50.

The demonstration is believed to be as a result of the postponement of elections in the country. There has been unrest in the country following an announcement by the Independent National Electoral Commission (CENI) that elections scheduled for December 2016 would be held in July 2017.

The ruthless suppression of the demonstration by the police has been condemned by several local and international human rights organisations as a serious violation of free expression.

AFEX joins the international community to strongly condemn the action of the Congolese police for exerting excessive force on the demonstrators which has resulted in the death of and injuries to several citizens.  We call on the police to investigate expeditiously into the matter and bring the perpetrators to book. We also call on the Police Service in the country to train their men in controlling demonstrators.