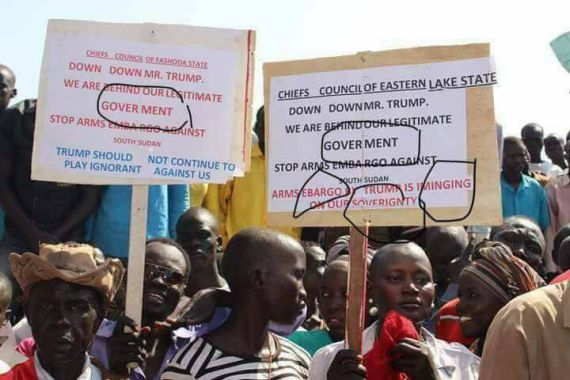 On February 6, 2018, two journalists were attacked by angry protesters while covering anti-US demonstrations in Juba, capital of South Sudan.

According to media reports, a group of demonstrators on Tuesday, February 6, severly beat up a foreign female journalist, Sam Mednick, working with AP new agency while she was covering the demonstrations. The journalist was reportedly injured on her arms, neck and face.  The police later intervened to rescue Mednick from her assailants.

The demonstrators were protesting against a recent US decision to ban the sale of arms to South Sudan which has been in the grip of violence since independence.

In the same incident, one demonstrator slapped Julius Gale, a local journalist working with Juba-based radio Bakhita who was also covering the demonstrations.

AFEX member, the Association for Media Development in South Sudan (AMDISS), condemned the attack on journalists on Twitter and urged the authorities to ensure utmost protection of during protests.

“Very unfortunate that some journalists were beaten or intimidated by the demonstrators during yesterday’s demo in Juba, South Sudan.  Journalists need to be given protection especially during such event if they must do their job well,” the Tweet read.

AFEX joins AMDISS to denounce the attacks on the journalists and call on the police to ensure that journalists are given utmost protection during such events.

Meanwhile, AFEX commends the police for their intervention to save the attacked journalist. We also urge the police to punish citizens who take the law into their own hands to harass or prevent journalists from doing their jobs.