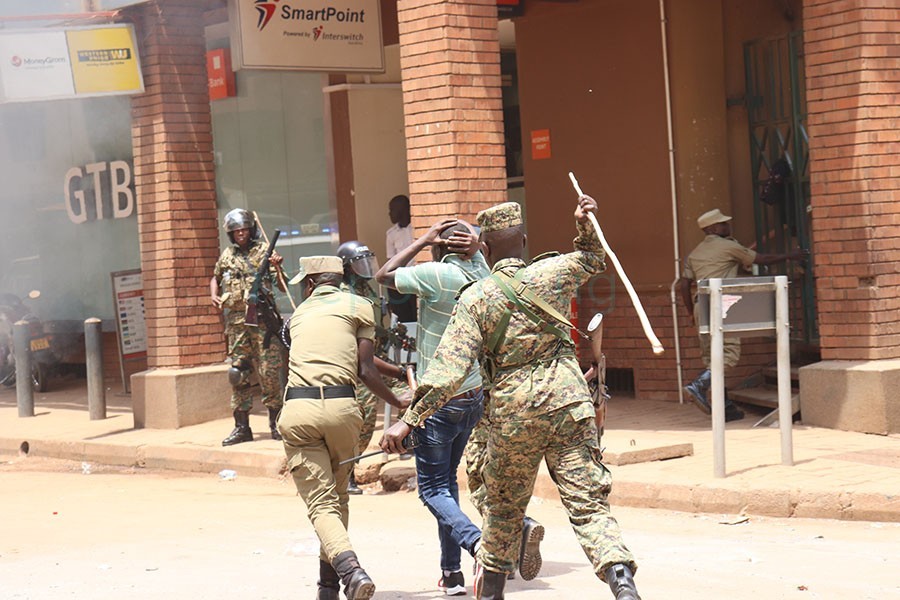 Soldiers whipping a protester during unrest on August 20, 2018. Credit: Nilepost

The African Freedom of Expression Exchange (AFEX) denounces the recent attacks by security agents against journalists and protesters in Uganda.

According to media reports, Ugandan police on August 20, 2018 fired live bullets and tear gas to disperse demonstrators in the capital Kampala who were demanding the release of some members of parliament including prominent opposition law maker, Robert Kyagulanyi Sentamu popularly known name as Bobi Wine who has been in detention since August 13, 2018.

On the same day, a police officer shot and killed a protester while five others were injured in the process.

Aside these violations, there have also been reports of journalists being attacked while covering the ongoing protests regarding the continued detention of Bobi Wine. AFEX member, Human Rights Network for Journalists in Uganda (HRNJ-Uganda) reported that police and army officials on August 21, 2018 physically assaulted five journalists covering the said protests in Kampala.

The security agents beat up and injured Ronald Galiwango and Juma Kirya working with NTV as well as Julius Muhumuza of Dream TV. The others were Alfred Ochwol of The Observer newspaper and James Akena a photojournalist with the Reuters News Agency.

Akena told HRNJ-Uganda that the security agents were very brutal in their attack on them. “I am in total pain, I have two of my fingers fractured, three big swellings at the back of my skull (head) – they were seriously targeting the head. I don’t know why all this terror. My camera is gone, I don’t know if I will get it back again….” Akena said.

After beating the journalists, and confiscating their cameras and recorders and deleting their recordings, the security agents transported the journalists to the Central Police Station where they were questioned and later released without any charges.

Prior to these incidents, military men attached to the presidential security guards, Special Forces Command (SFC) reportedly opened live bullets, whipped people and shot tear gas at opposition supporters who were gathered near Hotel Pacific in Arua in Northern Uganda. The attacks allegedly resulted in the killing of Bobi Wine’s driver. A group of journalists who were covering by-elections in the Arua Municipality were also severely beaten up and arrested. The journalists were charged with incitement to violence and malicious damage to property for covering the protest. They were released on bond two days later.

AFEX is seriously concerned about these recent acts of brutalities by security agents against journalists, opposition supporters and the general public at large as these could further constrict the freedom of expression and assembly space in the country. We implore President Yoweri Museveni to call the security agents in the country to order and ensure that the fundamental rights of the Ugandan people as enshrined in the national Constitution are guaranteed at all times.

We call on the police and army hierarchy to conduct thorough investigations into these incidents and bring the culprits to book. Security agents have a responsibility to ensure that journalists and individuals are free to exercise their fundamental rights to expression and freedom of assembly rights. AFEX urges authorities of the various security agencies in Uganda to train their officials on crowd control in order to prevent the abuse of citizens’ rights in line with international best practices.