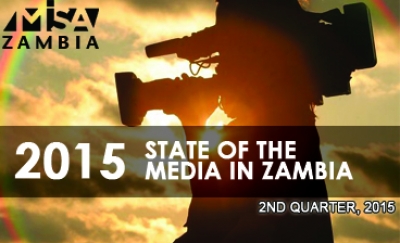 MISA Zambia launched the 2015 State of the Media Report for the second quarter of 2015 at the Cresta Golfview Hotel in Lusaka on September 2, 2015. The event attracted close to 45 key stakeholders from academia, civil society, government and the journalism fraternity at large.

In his keynote address, Forum for Democratic Process (FODEP) Executive Director, Macdonald Chipenzi stated that media freedom in Zambia had only seen a marginal improvement under the PF government as Journalists have continued to suffer double tragedy through increased incidences of harassment and intimidation in the midst of draconian legislation that criminalises the freedom of expression on the national statutes and low pay among others.

Mr. Chipenzi also noted that the prosecution of those seen to be advancing violent attacks on journalists has been selective, thereby becoming an issue of concern.

He also urged journalists and other practitioners to always have the public interest at heart and ensure they respect their moral responsibility as the country heads towards the tripartite elections in 2016.

Mr. Chipenzi further advised the government to own up to the many promises made during the elections in 2011 pertaining to the liberalization of the media and the promotion of media development.

Speaking at the same event, MISA Zambia Board Chairperson, Hellen Mwale said it was disappointing that the previous session of Parliament adjourned without even a single statement from the Minister of Information on the Access (ATI) to Information bill process despite having previously promised to make the presentation of the bill a priority.

She stated that it was high time the government gave a comprehensive pronouncement to show commitment towards the presentation of the ATI bill, which was actually reflected as one of the ruling party’s policies in the manifesto on which it was elected in 2011.

Among those in attendance were veteran good governance activist and MISA Zambia ATI Ambassador Reverend Suzanne Matale who strongly appealed for the need to scale up efforts in demanding for the ATI bill.

The meeting resolved to draft a petition on the ATI bill and meet the minister of information to present the said petition as a build up to the convening of Parliament later this month.