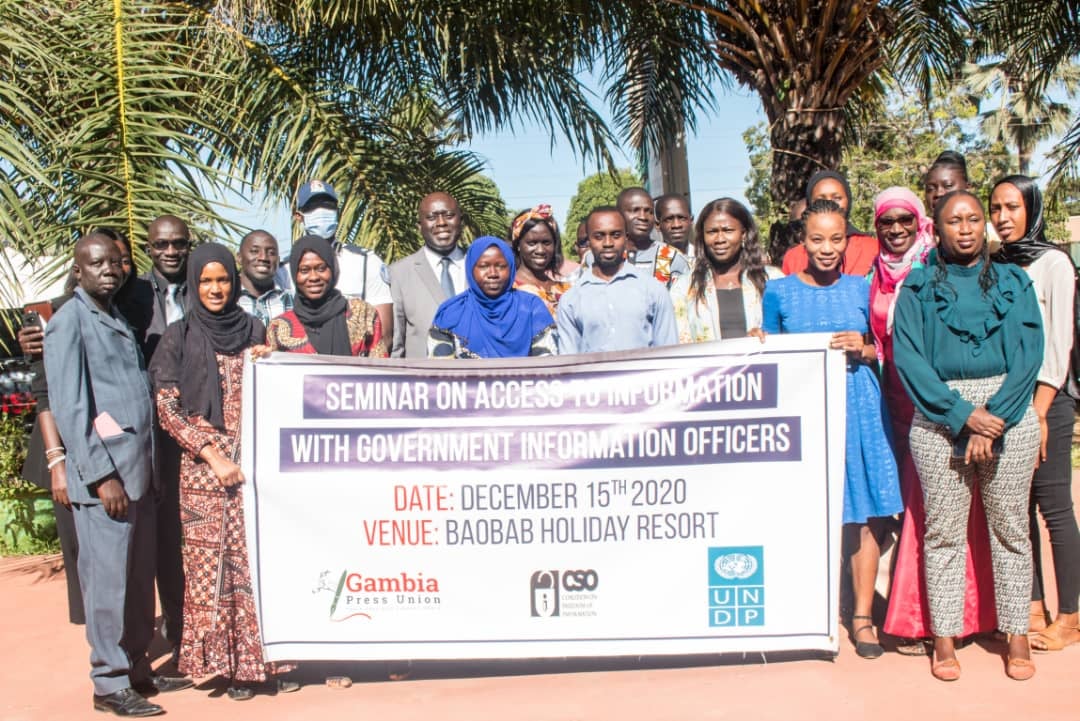 If the Bill is granted presidential assent, it will be the first time in the history of The Gambia for right of access to information to be legally recognized as a human right.  Globally, over 120 countries have such legislation and The Gambia has become the last country in English-speaking West Africa to have one.

The ATI Bill is a product of collaborative effort of the Gambian Civil Society which worked closely with the Government through the Ministry of Justice.  It was first tabled in 2019 by then Justice Minister Abubacarr Tambadou and has since gone through rigorous parliamentary scrutiny.

The Bill is aimed at proactive and organised dissemination of public records and information to the people.

Speaking on this milestone, the President of Gambia Press Union, Sheriff Bojang Jr., commended the National Assembly members for putting the Gambia on the true path to democracy.

“I want to commend the National Assembly members not just for passing the Bill, but also for debating on the Bill purely on its principles and benefits to society, devoid of partisan politics,” he said.

“This is an indication that all the political parties and indeed every Gambian is in support of access to information as it had been the missing piece in the Gambia’s quest to becoming a true democracy.”

With the technical and financial support of its partners, the GPU planted the seeds of civil society-led access to information campaign way back in 2016.  After a series of consultative meetings with the Government and other civil society organisations, the GPU collaborated with TANGO (The Association of NGOs) to establish the CSO Coalition on Access to Information.

The Chairman of the Coalition, John Charles Njie, said the change of Government in 2017 provided an opportunity for the media, government and civil society to work together towards a better Gambia.

“The passing of this Bill shows how mutually beneficial a collaboration between the civil society and government could become” he said.

“This is the first time that the civil society has worked with the Government on a legislation from conception to enactment, and for me that is an indication that the Government and civil society are not mutually exclusive. We are different sides of the same coin and it’s our two sides that make up a coin.

“The civil society is not here just to criticize government; we do constructive criticism where necessary, but we can also collaborate and work together in solving our problems and the success of this Access to Information Bill is a testimony to that fact.”

Mr. Njie commended the Ministries of Justice, and Information and Communication Infrastructure for leading the process on the side of the government.  The Ministry of Justice has been particularly instrumental in the process; the former Minister Tambadou played a key role and the current Minister, Dawda Jallow, took it and successfully completed the process.

From the outset, the Gambia’s Access to Information was not without international support. This came in the form of financial and technical assistance.  The main part of the funding came from the United Nations Democracy Fund (UNDEF) through a two-year project implemented by the GPU. Other partners including the United Nations Development Program, the National Endowment for Democracy, and the British Foreign, Commonwealth and Development Office were also key.

Technical support came in different forms and shapes from the Media Foundation for West Africa, Centre for Law and Democracy, Centre for Non-profit Law, Fesmedia, ARTICLE 19 and Gambia Bar Association.

Given the political will and commitment demonstrated by the President of the Republic since the inception, we are equally confident that he would assent to the Bill within the 30-day legal limit required.

The GPU, through the CSO Coalition on Access to Information, will continue to intensify its awareness campaign about the legislation to make sure Gambians understand and are able to utilize it.

The collaboration with the Government will also be strengthened so that it creates the necessary structures and systems for the effective enforcement and implementation of the Act.

The enactment of the Access to Information Bill by the National Assembly is just the beginning of another step towards an effective Right to Know regime in The Gambia. More still needs doing and the GPU is hopeful that with commitment and continuous partnership of all institutions and agencies, the Act would contribute tremendously to the democratization process of the country.