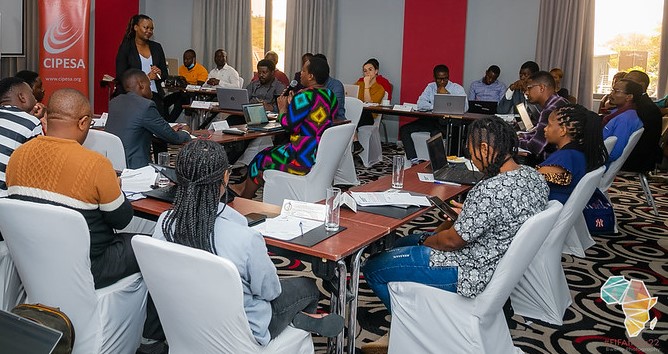 The Collaboration on International ICT Policy for East and Southern Africa (CIPESA) and Small Media held a workshop on the Universal Periodic Review (UPR) process as part of  Forum on Internet Freedom in Africa (FIFAfrica 22), which was held in Lusaka Zambia from September 26-29, 2022. The workshop is a product of the UPROAR project aimed at advancing the cause of digital rights globally by supporting engagement in international advocacy at the UPR.

The workshop entailed an overview of the UPR, its  purpose and the processes. Also included were in depth  discussions on international and regional normative frameworks on digital rights. Specific attention was drawn to the Universal Declaration of Human Rights as the first normative framework on freedom of expression. The International Convention on Civil and Political Rights (ICCPR) was also explored under the core tenets of the right to hold opinions without interference (freedom of opinion), the right to seek and receive information (access to information) and the right to impart information (freedom of expression).

It was noted that the right to freedom of expression is not absolute and that the three-part test is key in determining the circumstances which potentially justify limitations. Under Article 19 (2) of the ICCPR, limitations are specifically listed as ( i) it must be provided for in law (ii) it must pursue a legitimate aim (iii) it must be necessary for a legitimate purpose.

The three-part-test formed the basis of heated debate related to electoral democracy and internet shutdowns in countries like Cameroon and Tanzania when compared to Kenya where the government did not impose an internet shutdown during their recent elections. As a result of the comparative discussions, participants reached  the conclusion that there are still actions of governments that are a threat to internet freedom such as arrests, detention and assassination of some journalists. It is the responsibility of civil society, activists and human rights defenders to hold governments accountable through the use and increased participation in the UPR process.

The presence of Hon. Neema Lugangira from Tanzania, a member of Tanzanian Parliament and the Chairperson of the African Parliamentary Network on Internet Governance in the sessions was priceless and a beacon of hope in bridging the gap between civil society and policy makers towards promoting digital rights through the UPR.

The workshop also explored various case law on freedom of expression in Africa including precedent such as in Lohé Issa Konaté v Burkina Faso. Participants deliberated on the relevance of evaluating and critically assessing the law and ensuring that cases are framed in a manner that is in line with the jurisdiction of the particular court of law approached without which matters could be thrown out. This session gave the participants a clear understanding of the link between offline and online rights and specific laws that apply to minority and marginalised groups such as children, women, persons with disabilities and other vulnerable communities.

The session on campaign and advocacy planning aimed at equipping participants with the necessary tools required to engage partners on how to carry out campaigns and to execute advocacy strategies through the UPR. It highlighted the eye-catching and precise advocacy materials that could be used in social media as well as other platforms for the UPR at local level. It led to discussions on the critical role played by local stakeholders in leveraging the UPR for digital rights development in their various contexts. The session helped the participants understand how to engage with local partners and to ensure that there is effective implementation of recommendations made to their respective countries. This involved fact sheets and how to use them during the UPR process.

Participants engaged in a practical lobbying session where they had to appear before a UN delegate and present the issues affecting digital rights in their respective countries and recommendations for reform. This practical group exercise was very beneficial and informative because it gave the participants a chance to apply what they had learnt in regard to the UPR process. It gave them an opportunity to experience the review process at Geneva.

Through the UPROAR Website, participants were guided on how to leverage research and social media platforms online for effective design and branding as part of UPR engagements  related to digital rights. The workshop also entailed guidance on what stakeholder mapping is and its importance.

In a subsequent panel entitled ‘Stemming the Tide: Has the Universal Periodic Review Mechanism Contributed to Changes in the Digital Rights Landscape of States Under Review?’ panelists shared experiences from Namibia, Democratic Republic of Congo, Uganda, Rwanda and many others. This gave the participants in the workshop an understanding on how to prepare for stakeholder engagements and how to conduct evidence-based advocacy at the United Nations Human Rights Council.

It was noted that the Covid-19 pandemic led to the imposition of travel restrictions which caused difficulties in traveling to Geneva to physically participate in the UPR process. Online opportunities were a welcome alternative but the lack of reliable internet access among civil society on the continent during the sessions presented an additional barrier

Beyond making submissions and engaging during review sessions, participants were urged to also take part in monitoring recommendations. Experiences were shared about governments such as that of Uganda which rejected all the recommendations that were given in regard to digital rights. In such instances participants were encouraged not to give up and draw back due to such government response but to keep doing the work of advocacy in line with digital rights since the same is also a notable step in the right direction. They were also encouraged to collaborate with law and policy members to ensure that they know about the UPR process and that they are able to positively respond to the recommendations given. They were also encouraged to ensure that there is in-country pressure from civil society to ensure that governments act on the recommendations given to them. It was noted that in Tanzania there has been a significant increase in the acceptance of recommendations after there has been collaboration between civil society and parliamentarians.

The UPR sessions at FIFAfrica22 were very informative and intriguing as it engaged well-equipped workshop trainers. Experiences from those who had participated in Geneva engagements on digital rights stirred the urge for proactive engagement and participation by those coming up for review like Botswana.