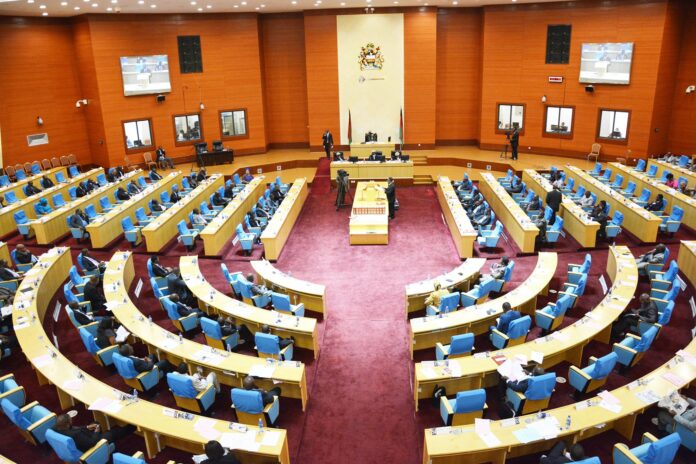 We applaud government for repealing bad laws.
Members of Parliament (MPs) on Tuesday, November 29, 2022 amended Section 4 of the Protected Flag, Emblems and Names Act of 1967 by removing the word ‘President’ from the Act. This means ‘insulting’ the ‘President’ is no longer a criminal offence under the Act.
Flag, Emblems and some names remain protected from ‘insults’.
Section 4 of the Act initially read: “Any person who does any act or utters any words or publishes or utters any writing calculated to or liable to insult, ridicule or to show disrespect to or with reference to 𝘁𝗵𝗲 𝗣𝗿𝗲𝘀𝗶𝗱𝗲𝗻𝘁, the National Flag, the Armorial Ensigns, the Public Seal, or any protected emblem or protected likeness, shall be liable to a fine of 1000 pounds and to imprisonment for two (2) years”.
A number of Malawians have been jailed for allegedly insulting the President based on the Protected Flags, Emblems and Names Act.
Malawi’s Minister of Justice Titus Mvalo told the media after the amendment that with the name President protected, the Act was criminalizing free speech which is inconsistent with democracy.
The amendment comes a week after the MPs repealed sedition laws that also criminalized freedom of expression.
MISA Malawi has been campaigning for the repeal of a number of insult laws including Section 4 of the Protected Flag, Emblems and Names Act and the Penal Code as one way of promoting media freedom and freedom of expression. Section 4 of the Protected Names Act and some sections of the the Penal Code have over the years been used to silence critical voices, including journalists.
In a meeting between MISA Malawi and the Attorney General (AG) Thabo Chakaka-Nyirenda in Lilongwe on April 6, 2022, the AG committed that government would repeal some laws that restrict media freedom, freedom of expression and other fundamental rights and freedoms, including the Protected Names Act.
Enacted in July 1967, the  Protected Names Act aimed to safeguard the dignity of the Head of State, the National Flag, the Armorial Ensigns and the Public Seal and to prevent the improper use of the National Flag, the Armorial Ensigns, the Public Seal and of certain emblems, colours, names and words.
Commenting on the amendment, MISA Malawi chairperson Teresa Ndanga commended government for walking the talk on legal reform.
“This is commendable. Insulting the president should never be a criminal offence. The law was retrogressive and bad for democracy. We applaud government for the good work it is doing in repealing bad laws ,’
“Journalists and ordinary citizens should never censor themselves for fear of being arrested for allegedly ‘insulting’ the President” Ndanga said.
In partnership with The International Center for  Not-for-Profit Law (ICNL), MISA Malawi is currently working to strengthen the civic space in Malawi  by  calling  for  the  repeal  of  laws  that  restrict  freedom  of  expression  in  Malawi.
Share
Facebook
Twitter
Pinterest
WhatsApp
Previous article
Participant Reflection on #FIFAfrica22: Effective Engagement in the UPR Process for Digital Rights Promotion
Next article
Sharia court in Nigeria sentences Islamic cleric to death for blasphemy
Recent articles
Freedom of Expression Violations