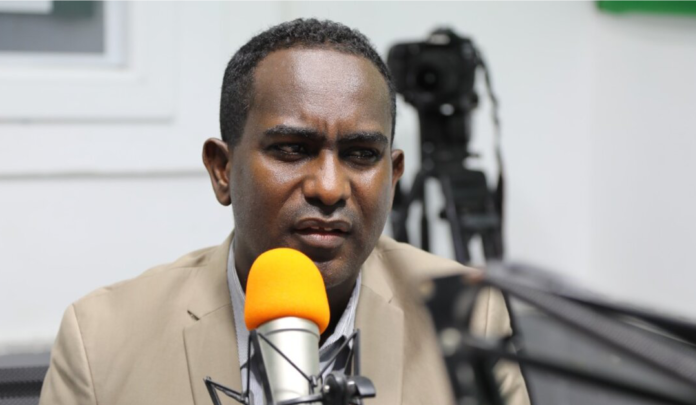 The African Freedom of Expression Exchange (AFEX) strongly condemns the prolonged detention and harassment of Somali media rights advocate, Abdalle Ahmed Mumin, and calls on the Somali authorities to drop all charges against him.

More than 90 days have passed since the judicial harassment and persecution of the co-founder and secretary general of the Somali Journalists Syndicate (SJS) began. In the latest development, the second hearing of the case which seriously affronts press freedom and the safety of the journalists in Somalia concluded after the Banadir Regional court adjourned the case to January 19, 2023.

During the second hearing held on January 15, 2023, Abdalle, protested the flagrant abuse of his rights by asking a series of questions, including, why he was detained without a court warrant and why he was held at Godka Jila’ow underground prison which the Somali government said had been closed.

“Why are you detaining me without a court warrant? Why Godka Jila’ow despite previous claim of closing the notorious underground prison? Why are you holding me at the CID while the police did not arrest me? Why were all the three charges trumped up 45 days after my detention? Why only me out of five other media organisations? Why is this case being delayed for 4 months now without no genuine reason?” he questioned the court.

Mumin’s case has dragged on from October 11, 2022 when he was arrested at the Aden Adde International Airport in the capital Mogadishu by officers of the National Intelligence and Security Agency (NISA) as he was preparing to board a flight to Nairobi. He was arrested shortly after he published on his Twitter account a CCTV footage, reportedly from the premises of the SJS’ office in Mogadishu the previous night showing security forces trying to break into the office.

An official statement issued by the Ministry of Information, Culture and Tourism on October 12, 2022, stated that Abdalle was being held on security-related charges.
“In contact with the National Prosecution Office, the ministry was informed that Abdalla Mumin is in the hands of the Somali Police Force and is being held on security-related charges. The Ministry, therefore, confirms that Abdalle Mumin has no charges related to his work as a journalist,” the statement reads.

The authorities held Mumin for days before releasing him on bail. He would later be detained again on October 18, 2022 and released on bail for the second time on October 26 as his health deteriorated while in detention.

According to Abdalle’s lawyers, prosecutors from the office of the Attorney General charged him under Article 219 (Bringing the Nation or the State into contempt), Article 321 (Instigation to disobey the laws), and Article 505 (non-observance of orders of the authorities) of the Somali penal code.

The judicial harassment of Mumin raised indignation in the country. Many human and media rights organisations denounced the repeated violations of Abdalle’s rights and the conditions the Ministry of Information gave on November 15, 2022, as alternative to having all charges against him dropped. More specifically, the Ministry requested, among other conditions, that Abdalle Mumin quit his media advocacy work and abandon future criticism of the authorities before all charges against him are dropped. However, Mumin and the media advocates turned down the conditions they considered “unacceptable and unlawful”.

AFEX is appalled by the judicial harassment of Mumin and the outrageous conditions placed on his freedom. We join our voices to that of the media and the international community to condemn the brazen assault on the journalist’s rights, we call on the Somali authorities to drop all charges against him. The Somali authorities must stop restricting legitimate press freedom and freedom of expression on the basis of national security claims.